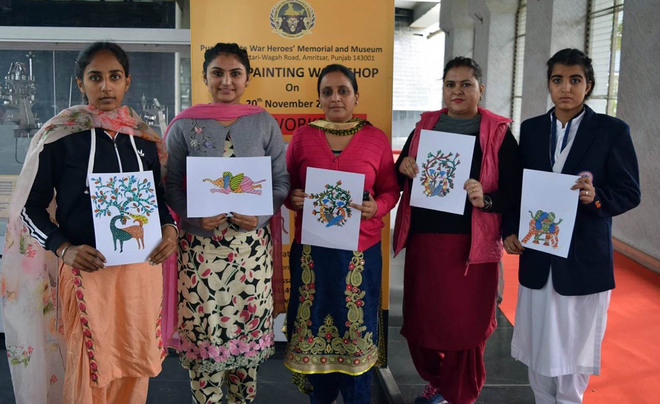 A free workshop on Gond paintings, a tribal art from Madhya Pradesh, was held at War Memorial and Museum in Amritsar.

In an attempt to create awareness regarding traditional-folk art forms of India and facilitate their revival through community collaborations, artists and institutions dedicated to creating social structures have joined hands. Leading the movement is the Punjab State War Memorial Museum, which began a series of art educational programmes that aims to bring the tribal and traditional arts forms to the city through engaging workshops. The museum hosted a free-for-all workshop on Gond paintings, a tribal art from Madhya Pradesh that is on the verge of being lost in time. Delhi-based artist Harvinder Kaur conducted the workshop that had 60 people, from all age groups. A museum designer and an art conservator, Kaur has been teaching the subject of anatomy of Indian Traditional arts at National Museum. She and her team have designed galleries at the war memorial museum. “The more you travel across Punjab, the more you realise that the awareness regarding art forms, both Indian traditional and tribal folk art forms, is almost zero among the people. Also, there is an acute lack of art appreciation that is forcing some of the beautiful traditional art forms to fade from our cultural landscape. In Delhi, people are ready to shell out Rs 5,000 to Rs 7,000 per art session on tribal art genre, but here no one knows about it. So, it becomes important to conduct activities regularly focused on art education,” she said. The workshop had children, grown-ups and senior citizens in attendance.

“Gond is one of the largest tribal community of India and their art dates centuries back. It is known for its bright colours and detailing. The colours used in this art form are not easily available as they are mostly organic in nature, made form charcoal and natural elements. When I first started the workshop, no one had any knowledge about the form but when we finished, everyone was too eager to continue and took their paintings home with pride,” she said.

Col HP Singh (retd), project director of the museum said the art education programme is a part of project to create museum as a social hub and centre for creative engagement. “We will continue with these art workshops to motivate people to come and support art forms. Also, we are planning to launch multimedia events, including movie and documentary screenings, to generate some cultural buzz around the museum.” The museum had earlier conducted workshops in calligraphy and terracotta handicrafts as well.

Meanwhile, in another initiative to invite attention towards disappearing street art forms of Amritsar, Dilbir Foundation, a cultural NGO, has invited artists’ commentary regarding the disappearing street art forms specific to the city. As a part of its culture conservation activities, the NGO is tracing the legacy of various street art forms that used to be popular back in time. “Several among them include paintings of Lord Hanuman, that coincided with the traditional festival of Longoor Mela in city. A lot of artists used to display and sell these art works from the pavements of Hall Bazaar. But now, no traces of them remain and that’s what we are trying to find out with our initiative,” said Gunbir Singh, president of the Dilbir Foundation.