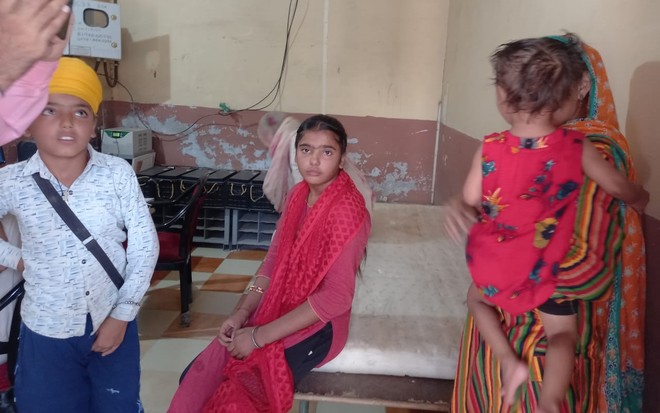 Members of the victim’s family in Tarn Taran on Friday. Gurbaxpuri

A dispute over the land of a family in the border village of Gehri claimed one life and left three injured when about 30 armed men fired indiscriminately here this afternoon.

Villagers accused the police of not taking timely action though the victim brought the matter to the notice of the police station and police helpline much early.

The deceased has been identified as Resham Singh (50) while one of his associates, Multan Singh, was seriously injured and admitted to the Community Health Centre at Kasel. The bone of contention was a piece of eight kanal land of the family.

The victim’s brother Dilbag Singh had sold his eight kanal parental land to Manjinder Singh of the same village some time back. Dilbag wanted to give possession of the land which deceased Resham Singh was cultivating.

For the last three weeks, Manjinder Singh along with Dilbag Singh had been intimidating Resham Singh with arms. Resham Singh approached the Sarai Amanat Khan police to take action in this regard.

On Friday, Manjinder Singh, Dilbag Singh and other armed men reached the plot on Friday and tried to encroach upon it but Resham Singh stopped them from doing so. The armed men opened indiscriminate firing on Resham Singh and his associates. Resham Singh, who was hit in the stomach, died on the spot.