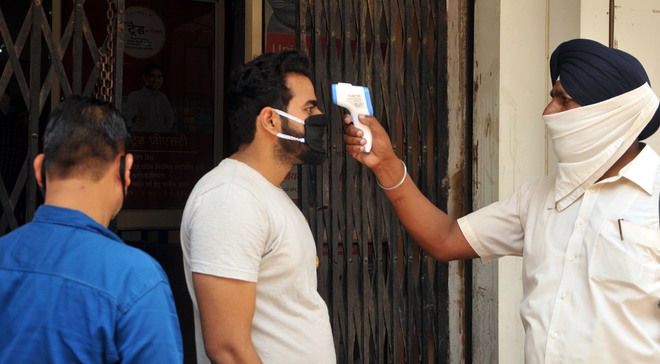 A death of Covid-19 patient was reported on Friday along with 20 fresh positive cases, taking the tally of Amritsar district to 440 cases. A positive case has been reported from Tarn Taran district.

Rakesh Kumar (60), a resident of Katra Sher Singh, is the eighth person who lost life due to Covid-19. He was admitted to a private hospital from where he was referred to Government Hospital after his condition deteriorated on Thursday.

Dr Jugal Kishore, Civil Surgeon, said all efforts were made to resuscitate Rakesh, but he suffered a heart attack, which proved deadly.

Half of the 20 new positive cases do not have a travel history. Two persons (each) tested positive from Katra Baghiya, Lahori Gate and one case each has been reported from Jai Nagar, Chand Avenue, Bombay Wala Khoo, Katra Charat Singh and Gulmohar Avenue. Five contacts of the patient from Bombay Wala Khoo were found symptomatic.

Gurmej Singh, a resident of Alia village, Khadoor Sahib (Tarn Taran), was today admitted to the Civil Hospital. He was among 27 suspected patients whose Covid-19 test reports were awaited. Samples of 26 others were found to be negative.

Meanwhile, Satnam Singh (45), who succumbed due to Covid-19 at a private hospital in Amritsar on Thursday was cremated at Patti.

The body of the victim was sent to Patti in an ambulance of the Health Department. The department also sent two health workers with PPE kits for cremation.