2 arrested for planting IED under Sub-Inspector’s car : The Tribune India 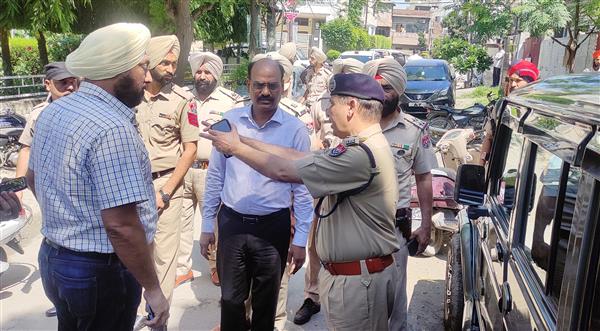 ADGP, Punjab, RN Dhoke along with other police officers inspects the spot from where the IED was recovered in the Ranjit Avenue area in Amritsar on Wednesday. Photo: Vishal Kumar

A day after an IED was found hidden under the vehicle of Sub-Inspector Dilbagh Singh, the Punjab Police on Wednesday said two persons who had allegedly planted the explosive material were arrested from the Indira Gandhi International Airport, Delhi.

The accused are said to be from a village in Patti subdivision of Tarn Taran district.

Earlier, police sources had claimed that the device was similar to the one recovered from Tarn Taran district recently.

According to police sources, the duo was trying to leave the country when they were arrested. A senior police officer confirmed the development, but refused to divulge any detail.

Earlier in the day, ADGP, Punjab, RN Dhoke inspected the spot in the Ranjit Avenue area from where the Improvised Explosive Device (IED) was recovered on Tuesday.

Speaking to mediapersons here, Dhoke on Wednesday said the IED weighed about 2.7 kg and it contained RDX and a timer. A mobile phone was also recovered, he added.

Replying to a question, Dhoke said the police were also investigating the terror angle in it. He said the DGP and other senior officials were monitoring the case closely.

On SI Dilbagh Singh’s claim of getting threats, Dhoke said investigation in this regard was going on.

“Dilbagh Singh is a capable officer and he had done a very good job in the past. We will enhance his security cover,” the senior police officer said.

A CCTV footage showed that two motorcycle-borne unidentified persons kept the explosive material under the sports utility vehicle (SUV) and then fled the spot.

A major mishap was averted as the device somehow fell off the vehicle and was spotted by the car cleaner.

At present, it was difficult to say from where this IED came, he said. “But according to the trend of recovery of IEDs in Punjab so far, all of them came from Pakistan,” he added.