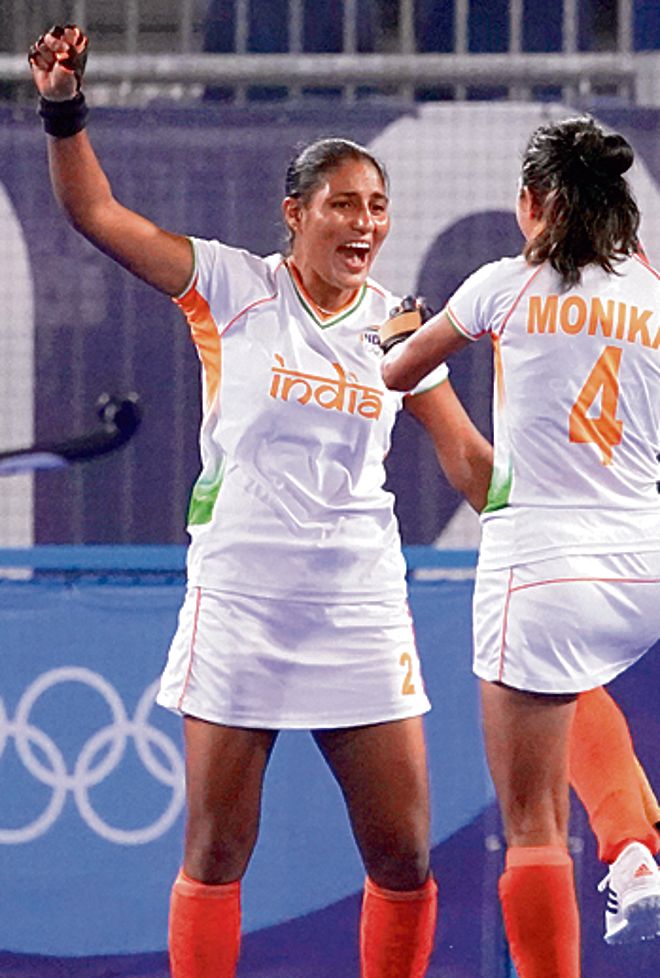 Gurjit Kaur in action against Argentina at Tokyo Olympics.

The Indian women’s hockey team gave a tough fight to Argentina before losing 1-2 in the semifinals at the Tokyo Olympics, but Gurjit Kaur’s two goals in two matches have given her family and friends hope for a bronze medal.

Gurjit’s sister Pardeep Kaur, a former player who is now a coach, said: “Destiny did not favour India. Argentina are a very talented bunch. Gurjit and her teammates put in their best but luck was not with them.”

The whole family — including father Satnam Singh, mother Harjinder Kaur and brother Gurbhej — were glued to the TV the whole afternoon at their house in Miadi Kalan village, which falls in the Ajnala sub-division. “I told Gurjit to advise the team not to lose heart and continue to work hard, and they would find success in the next match,” said Satnam Singh.

In Jalandhar, after Gurjit’s goal, the phone of Navjot Kaur, principal of the Khalsa College for Women, has just not stopped ringing.

It was during her time at this college as a BA student, from 2013 to 2015, that Gurjit’s international career took off. She first played for India in 2014, but even before that her coaches — Olympian Varinder Singh, Parminder Kaur and Kulvinder Singh Saini — had seen the makings of a star in her.

“We knew she was special. During college days, she practised for hours in the field during peak afternoon!” said Saini. “We would ask her not to overdo it and she would say: ‘I’m having proper diet, I will handle it’.”

“She was fluid on the ground. She has stayed in touch all through her sporting journey,” Varinder Singh said. “We won the state championships for three consecutive years when she was a student,” said Parminder Kaur. “She was so shy and soft-spoken, she used to hide behind others during interactions!”

“During her college days, when a teacher was absent, Gurjit would go missing. She would be eventually found in the ground, practicing,” said Navjot Kaur.

(With Aparna Banerji in Jalandhar)