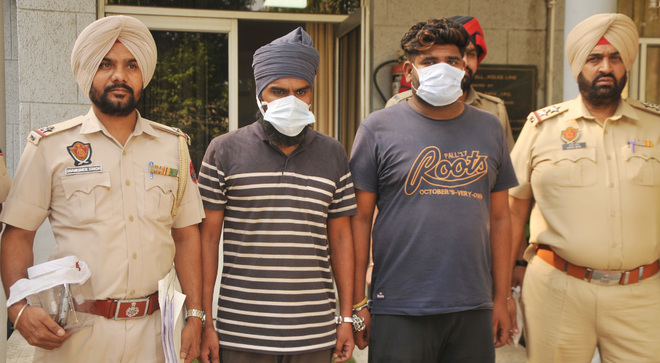 The accused in the Amritsar police custody on Tuesday.

The Division-A police have nabbed two persons and recovered a pistol and stolen bike from them.

They have been identified as Gursimranjit Singh, alias Simu Umarpuria, and Karandeep Singh of the Maqboolpura area. They were held from near the inter-state bus terminus. The police got a tip-off that the duo were drug addicts and used to steal vehicles and sell these to get money to procure drugs.

Following specific inputs, they were signalled to stop at a checkpoint near the bus stand. They tried slipping away but were nabbed by the police. When asked about the documents of the bike, they could not produce the same, nor could give any satisfactory answer. They were arrested and produced in court, which sent them to police remand.

During interrogation, the police recovered a .32 country-made pistol from Gursimranjit. The police said Gursimranjit had two murder bids and robbery cases registered against him at Vallah and Ranjit Avenue police stations here and has two more cases in Ajnala police station as well.

Amritsar: Busting a gang of vehicle lifters, the police have nabbed three persons and confiscated three stolen bikes from their possession. The accused were identified as Vishal of Ajnala, Karanpreet Singh of Gopal Nagar and Jatinder Singh of Waan Tara Singh village in Khalra in Tarn Taran. They were nabbed from the Chatiwind police chowki area on Monday and recovered a stolen bike from them. During investigations, they told that they had stolen the bike from Amritsar. Further interrogation led to the recovery of two more motorcycles. The police authorities said further probe was on and more recoveries are likely to be made from them. TNS