Only 151 cases of local spread reported so far: Health Minister 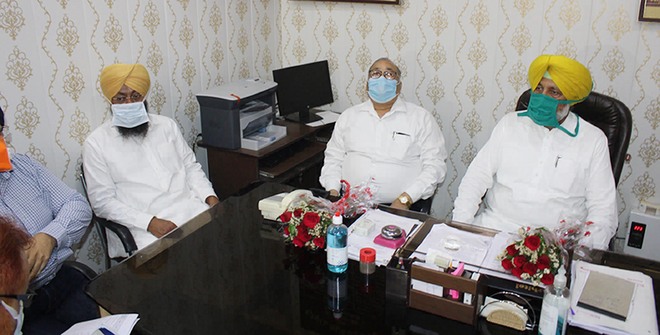 With five fresh cases of Covid-19 reported on Sunday, the count of positive patients has now reached 392 in the district. The district health authorities also reported discharge of three patients after complete recovery, taking the tally of cured patients to 310.

Civil Surgeon Dr Jugal Kishore said of the new cases reported, two are residents of Mehta village who had returned from the UK recently. He said two other patients were contacts of a positive case from the Hathi Gate area. They are a Covid patient’s son and granddaughter. A person from the Park Avenue area, who had complained of influenza like illness (ILI), also tested positive, said the civil surgeon. Now, 75 active cases are admitted to the Covid care centre, the district has reported seven deaths due to Covied-19 so far.

Meanwhile, Health Minister Balbir Singh Sidhu, who visited the city on Sunday, said most of the persons testing positive returned from foreign countries or other states. He said local spread of the disease was minimal. Sidhu claimed that only 151 cases of local spread had been reported so far.

Talking about the growing number of positive cases in the state, Sidhu claimed that it was because the government had managed to detect all positive cases and their contacts. He said the state government’s efforts to contain the spread of the disease had been lauded at the national level.

The Health Minister later visited the Golden Temple. Responding to a query about opening of religious places, he said that it was the purview of the Chief Minister and he would take the decision in this regard. The minister lauded the role of government employees and health care professionals for their services. He urged the general public to take precautions.