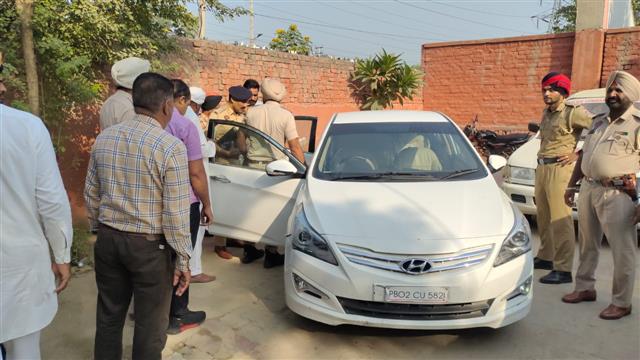 The car in which the victim was found dead in Amritsar.

A youth was found dead in his car near Basarke Bhaini village falling under the Gharinda police station under mysterious circumstances here on the Friday-Saturday intervening night. He was shot dead by unidentified persons. The air-conditioner of the car was on when the family found his body.

The deceased was identified as Gurpreet Singh, alias Gopi (28), a resident of Bhaini village. A preliminary probe suggested that his body was dumped at the site after killing him somewhere else. After taking the body into custody, the police sent it for a postmortem. Senior police officials, including Attari DSP Parvesh Chopra, reached the spot for initial investigations.

The police scrutinised CCTV cameras in the area and found some clues about the perpetrators. Raids were on to nab the suspects.

Sawinder Singh, paternal uncle of the victim, said he had helped Akashdeep of the same village in getting a bail. Akashdeep had invited him to a party and they had gone to Chheharta area last evening. He said around 2am, the family got a call from Akashdeep’s family that several armed persons had attacked them and Akashdeep had a narrow escape in the incident and had returned home. The family advised him to go and search Gopi.

He said while searching for him, the family members reached near Bhasarke Bhaini village and found the car, the AC of which was on. The victim’s body, which bore three bullet injuries, was in the car. He said they took the body to a hospital where doctors declared him dead. They were surprised over why he was killed.

Gurpreet Gopi was married and had a four-year-old daughter. His wife lives in Canada and he along with his daughter was to leave for Canada in the next few days.

DSP Parvesh Chopra said a case under Sections 302 and 334 of the IPC and relevant sections of the Arms Act was registered against the suspects. Investigation is on.

Raids on to nab suspects