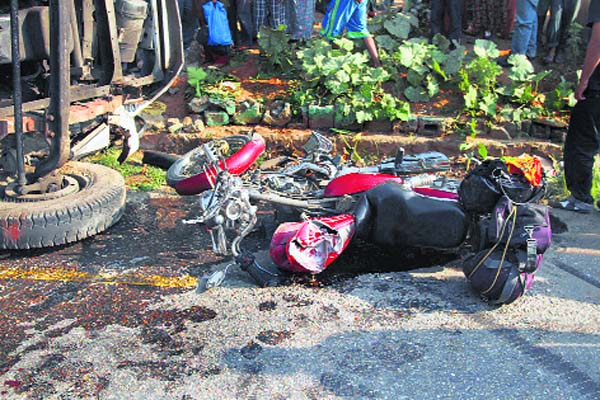 Three persons including a Home Guards jawan died in two separate road mishaps in Bhindi Saida and Kathunangal police station area, respectively, while another Home Guards jawan was injured in another mishap in Pandori Waraich village on Sunday.

Three persons including a Home Guards jawan died in two separate road mishaps in Bhindi Saida and Kathunangal police station area, respectively, while another Home Guards jawan was injured in another mishap in Pandori Waraich village on Sunday.

Kala Singh and his son Gurpreet Singh, both residents of Fattewal village, died in an accident in Kotla Suraj village. Amar Singh, brother of Kala Singh told the Bhindi Saida police that Kala Singh, his wife Santo and son Gurpreet Singh, had gone at the cremation of a relative at Bhindi Saida. After the cremation, they were returning on their bike (PB-14-D-3697) and reached Kotla Suraaj village village, when a speedy and rashly driven goods carrier hit them. They fell on the road and suffered grievous injures. They were immediately rushed to a hospital in Ajnala, where doctors declared Kala Singh and Gurpreet Singh dead, while Santo was serious.

The police have booked an unidentified driver of the goods carrier (Chhota Haathi) (PB-06-M- 2653) in the case and further investigations were on to identify and arrest him.

Similarly, Home Guards jawan Malkit Singh was found dead near Fattubhilla village. Apparently, he was hit by an unidentified vehicle at night. His wife Jasbir Kaur told the police that Malkit was posted at Majitha police station. She said she received a call from him around 10.30 pm on Saturday and his duty was over and he was returning home. However, he did not come. Yesterday, they started searching for him and his body was found near Fattubhila village road. His bike was badly damaged.

The Kathunangal police have booked an unidentified person under Sections 304-A, 279 and 427 of the IPC. Further investigations were on.

In another incident, Gurdeep Singh, a Home Guards jawan posted at Government Railway Police in Amritsar was injured when his bike was hit by a goods carrier near Pandori Waraich village on Sunday. He said the drivers of goods carrier and a tractor trailer laden with wooden logs fled from the scene. The police have registered a case.