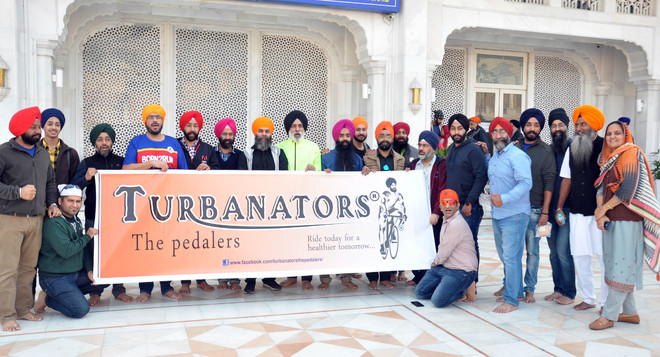 A total of 31 members of Turbanators-The pedalers, a Delhi-based cyclist group, on Sunday reached Golden Temple to mark the 550th birth anniversary of Guru Nanak Dev.

They started from Delhi three days back. All of them are professionals of various vocations such as graphic designing, law, IT, aeronautical engineering and others. They paddled 550 km via Dera Baba Nanak in Gurdaspur district. It was the eighth such endurance ride and third visit to the city on bicycles.

The expedition was named ‘Satkartar Ride 2.0’ and was dedicated to the 550th Parkash Purb of the first Sikh Guru. The motive was to spread the message of ‘Naam japo, kirt karo and wand chakko’ preached by Guru Nanak.

The group was constituted after the Sikh peddlers were disqualified for a cycling event in Delhi for not wearing helmets. Jagdeep Singh, a member of the group, said they had filed a suit in the Supreme Court, which directed them to approach the Ministry of Youth Affairs and Sports. They will soon write to the Ministry with help from legal advisors of the United Sikhs, an NGO.