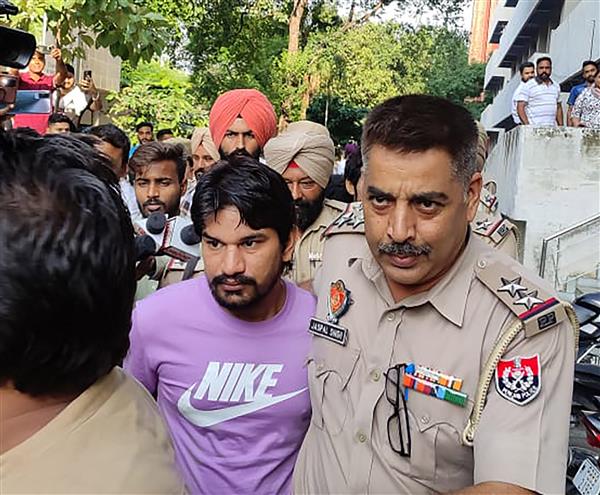 Kapil Pandit and others being produced in the court. Vishal Kumar

The city police have arrested Deepak Mundi along with Kapil Pandit and Rajinder Jocker in connection with the murder of gangster Ranbir Singh, alias Rana Kandowalia.

They were brought on production warrant from Mansa jail. Earlier, they were arrested in connection with the broad daylight murder of Punjabi singer Shubhdeep Singh alias Sidhu Moosewala in May this year.

Kandowalia was gunned down by four armed persons at a private hospital on Circular road in August last year.

Police Commissioner Arun Pal Singh said they were produced in the court which has sent them to five-day police remand for further interrogation in the case.

Earlier, the police had arrested notorious gangster Lawrence Bishnoi and Jaggu Bhagwanpuria in the case. It was alleged that Kandowalia was gunned down in August 2021 at the behest of Bhagwanpuria.

Mukhwinder Singh Bhullar, Deputy Commissioner of Police (investigations) said that Mundi and two others had conducted recee of Kandowalia. At first Mundi was assigned with the job to kill Kandowali. He had come to Ranjit Avenue area in order to shoot him five days before he was gunned down.

“Rana used to go to a gym in Ranjit Avenue. However, due to presence of PCR team he could not execute his plan. Later, Bhagwanpuria allegedly assigned some other work while asking his other associates to eliminate Kandowalia,” said Bhullar. He said further investigations were on to know their role behind his murder.