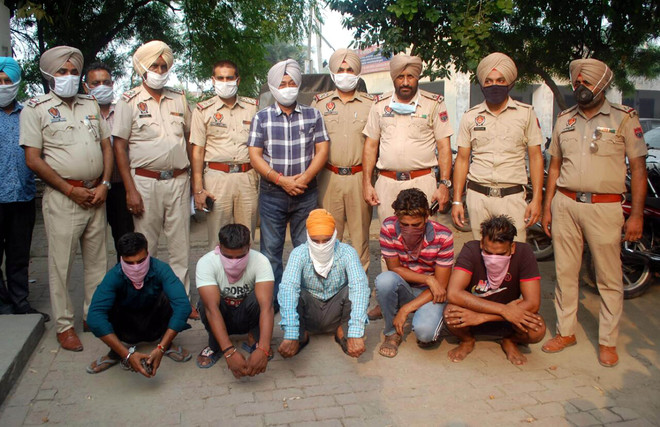 All five accused in the custody of the Amritsar police on Friday.

With the arrest of five persons, the police on Friday claimed to have solved a robbery case in which a woman was looted in the Sultanwind Road area here a week ago.

Those arrested were identified as Daljit Singh of Bharariwal, Kuldip Singh of Majitha, Vishal Singh of Majitha, Gurpreet Singh of Rori village (Majitha) and Sukhdev Singh of Kot Mit Singh on the Tarn Taran road here. The police recovered two snatched mobile phones, two sharp-edged weapons, a motorcycle and a toy pistol from their possession.

Two of their accomplices, including Gurdyal Singh, alias Gochha of Dolenangal village in Beas, and Arsh Gupta of Harkrishan Avenue Link Road Sultanwind were yet to be arrested. Perneet Dhillon, SHO, Sultanwind police station, said the accused had committed the robbery on the directions of Sukhdev Singh, a resident of the same locality. He was in need of money. Investigation revealed that Gochha had fired a gunshot that led to the injury of a youth. He said further investigation was under progress. Gochha was a proclaimed offender in an NDPS case registered with the Beas police last year.

Six armed persons had robbed a woman, identified as Harbhajan Kaur, of Bhai Manjh Singh Road in the Sultanwind area here on September 10. While fleeing, the accused started firing leaving one person injured. The police had managed to find CCTV grab of the suspects on the basis of which the police had identified Gurdyal Singh.

The victim said they ran a small grocery store on the ground floor of the house. She told the police that six persons came on bikes and four of them gained entry to the shop. She said the accused were armed with sharp-edged weapons and a pistol and had their faces covered.

Immediately after entering the shop, they thrashed and tried to strangulate her. As people started gathering, the accused decamped with around Rs 35,000 and four mobile phones, she said.

Her son, Rajinder Singh, who also reached the spot after being informed, was pushed by the accused who fired while running away. The bullet hit his friend Arshdeep Singh who was accompanying him. Rajinder had gone to the Khalsa Nagar area for some work.