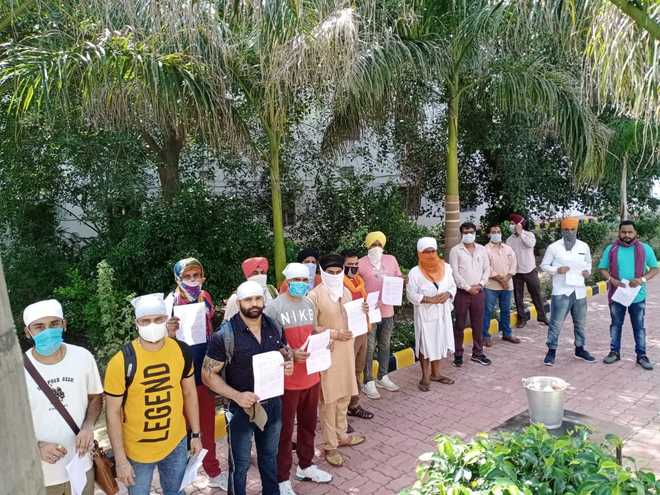 The persons discharged from an isolation centre in Khadoor Sahib before leaving for homes. Gurbaxpuri

The district reported the death of a 60-year-old man on Wednesday. The victim, identified as Ashok Kumar, was a resident of Ramdas Colony. As per the district health bulletin, he was suffering from diabetes and hypertension. With this fatality, the death toll has increased to 49 in the district.

The district also reported 13 fresh cases, taking the total count of positive cases to 1,048. Of the new cases, nine are ILI (influenza-like illness) cases while four are contacts of positive patients.

One of the ILI cases is a local resident, who is at present living in New Delhi, has also tested positive. For the purpose of statistics, a permanent resident of a respective district, irrespective of his or her present stay, is counted as positive case or casualty from that particular district.

Tarn Taran: Twentyfour more NRIs were quarantined at the isolation centre in Khadoor Sahib here on Wednesday. They returned from Dubai, Canada, England and the US.

Meanwhile, 15 persons, who had returned from abroad and quarantined on July 1, were sent to their homes from the isolation centre at Khadoor Sahib after they were declared negative by the Health Department.

One of the seven positive patients under treatment at the isolation ward of the local Civil Hospital was sent home as his report came out negative. There were nine positive patients under treatment in the district, six in the isolation ward of the Civil Hospital and three were kept at the Covid-19 Care Centre at Mai Bhago Centre, Sheron.

Bhai Nirmal Singh, a follower of the Kar Sewa sect, Khadoor Sahib, who was looking after quarantined persons at the centre, said 12 of the 15 had returned from Kuwait while one each from Canada, China and Georgia.

At present, 139 persons were quarantined in the Khadoor Sahib isolation centre. These persons were being provided food, medicine, etc, by the Kar Sewa sect. — OC