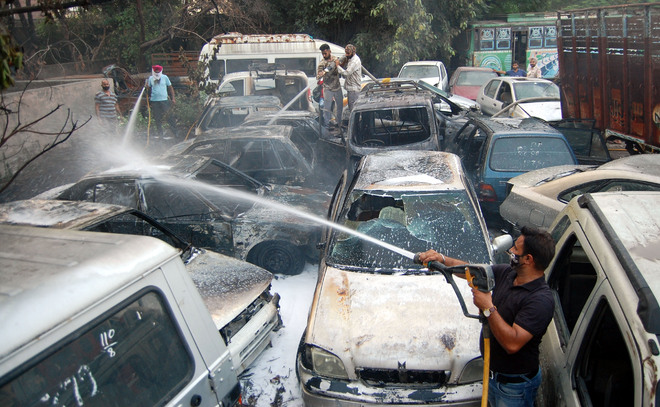 Firefighters try to control the blaze outside the bus stand police chowki in Amritsar. Vishal Kumar

Several case property vehicles stashed outside bus stand police chowki caught fire on Monday. This is the second such incident, which took place at the same chowki in the last two months. It took a couple of hours for the firefighters to douse the flames.

Additional Deputy Commissioner of Police Harpal Singh has been probing the case to ascertain the reason behind the incident.

Bus stand chowki is located inside Shaheed Madan Lal Dhingra Inter State Bus terminus. A number of vehicles were stashed outside the police, which were seized or impounded by the police in different cases, however, owners of the vehicles did not show any interest in getting these back or released by the court. Over a dozen case property vehicles were destroyed two months ago while seven vehicles were gutted in fire on Monday.

Rambagh police station officials said it was an accidental fire. Cops said passengers at the bus stand informed them about fire. The Additional Deputy Commissioner of Police said the investigation was under way.