This Father’s Day...celebrating those who remained at the forefront during Covid times 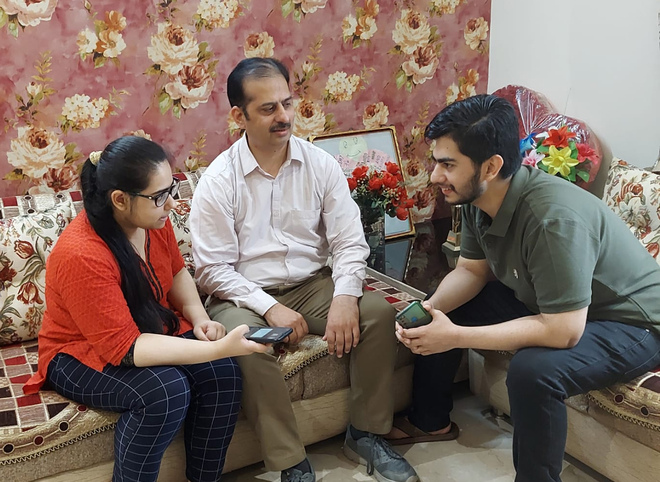 Dr. Chander Mohan spending some time with his children at his residence in Amritsar on Saturday. Photo. Sunil Kumar

While we celebrate motherhood as one of the greatest feats, fatherhood needs an equal mention. The Tribune highlights stories of fathers, who have remained at the forefront of the Covid-19 battle and stood out as real-life superheroes

‘I have become more aware as a father’

For Dr Chander Mohan, an eye specialist and senior medical officer at Jallianwala Bagh Martyrs’ Memorial Civil Hospital, a father’s involvement in routine affairs of children is very important. And, he has been balancing his duty as a doctor and as a father throughout the pandemic. “Gone are the days when it was believed that raising children is the duty of women only. Nowadays, for working couples, it is the duty of both partners,” he said.

His professional responsibilities as a frontline warrior during the pandemic divided his time and his children supported him throughout. “My daughter is in MBBS first year. By the time I reach home every day, she already has many questions related to my day and medical science. Even if I am exhausted, I try to help them out in their studies,” he shared.

He said the pandemic has changed the way he feels. “Earlier, I used to rush home and sit for a while. Now, I come back, take shower and change clothes before meeting any of the family members. These are the precautions you have to take if you are working in the medical field. I have become more aware about my responsibility towards my family, my children,” he said, adding that being a father he tries to be available to his children all the time. “Physical availability might be an issue due to working hours, but I call them in between to enquire if they are taking their online classes or if they have had their meals on time,” he said. — Manmeet Singh

‘Want to make every minute spent with dad count’

Ssujata (14) and her younger siblings Aadika (12) and Moksh (9) are busy in making plans to celebrate the day with their father Neeraj Kumar, an inspector in the Punjab Police.

They plan to bake a cake, make a card and spend quality time with him. Every year, they celebrate together this day.

Nevertheless, this year, the day acquires different meaning, because of the unprecedented health crisis that has engulfed the world, especially for the family members of frontline warriors, including doctors and policemen.

Neeraj, who was involved in social service besides law and order duties, had been on field all throughout last year, when he caught the infection in June 20 last year. He had to be hospitalised as his health deteriorated. Though he recovered, Covid-related complications took a toll on his body and he is still recovering.

“For most of the time, Papa used to remain in field, distributing ration to the needy besides maintaining law and order. This used to keep the entire family worried,” said Sujata, adding that though he used to take precautions, still the infection caught him. “Being a cop, the call of duty is supreme for him and he used to remain in the field during those difficult times,” she proudly says. “I am proud of him for his commitment towards his duty, but a concern always remains. But the bad time is over and now, we want to make every minute count and spend quality time with him,” she said. When asked what she has planned for the day, she quipped: “It’s a secret.”

Neeraj’s perception towards fatherhood, too, has changed after the pandemic. “Earlier, when I used to come back home from duty, children used to be asleep. I used to leave for duty the next day before they woke up. Now, I want to make an extra effort by spending time with my children and therefore, I decide to take some time out for them,” Neeraj said.

Back on duty, he still fears taking the infection back home. “We have a joint family and my elderly parents also live with us. It always remains a challenge not to carry infection home so that nobody gets infected because of me,” he said. As for Father’s Day, Neeraj plans to celebrate the day with his kids and his father. — PK Jaiswar

He begins & ends his day with an unfaltering determination

For the last one year, teachers, too, are having a mix of good and bad times. While a sudden shift of the entire education system to digital mode has brought in a desperate need to evolve technologically, the pandemic has added to their woes by making it challenging to give their services on the frontline.

Vikas Parashar, a mathematics teacher at DAV Senior Secondary School, Hathi Gate, too, had to struggle to manage his online and offline duties as a teacher and a father.

Parashar’s 18-year-old son Shauvik and 14-year-old daughter Pankhuri talk about his daily routine throughout the pandemic. “My father has always been my role model as we have seen him learning and evolving consistently as a professional and an individual. He begins and ends his day with an unfaltering determination and smile daily. Since he is also an NCC officer in his school, he used to wake up early to chalk out his plans for the day. He used to actively lead relief campaigns and give duty everyday during migrant retreat last year when the pandemic was at its peak. At that time, he used to leave home early in the morning and return late at night and we would constantly worry about his health,” shared Pankhuri.

These days, she said, his day begins with conducting online classes. “As a teacher, he has constantly been involved with his students continuously making sure that they do not miss out on learning due to the pandemic. He creates innovative methods to teach his subject, which otherwise is considered tough. His conduct with his students is always smooth and light as students can be seen laughing and enjoying during long periods,” she said.

Pankhuri added that throughout the pandemic she had seen her father juggle his duty as a teacher and a socially responsible citizen without complaining. “That’s why he is my role model. There are days when he comes back home tired and exhausted. But he never lost his enthusiasm and has been seen getting ready to return to work with greater determination.” Vikas said he always makes sure that he is able to take out some time to cook ‘rajma-chawal’ for his daughter and nurture his plants, while performing his other duties. The family ends its day by having rich talks about their daily happenings. — Neha Saini

For this 31-yr-old bizman, his father is guiding light

For Amarpreet Singh, 31, his father is a guiding light who not only raised him single-handedly but also shaped his career.

“I was only 9-year-old and elder sister Tejinder Kaur was 10-year-old when my father and mother parted ways. I vividly remember him getting up early and helping our granny in getting them ready for school,” says Amarpreet Singh. He could not expand his business and had to be content with a PCO shop outside the residence, so that he could take care of his children.

Gurwinder, 55, recalls: “Those were very difficult days when he had to sit for hours at the shop as well as ensure that the children got wholesome food, devoted enough time to studies, got new garments and their other requirements were fulfilled.” At times, his basic job of earning livelihood was relegated while looking after the kids.

Gradually, as the kids grew he started focusing on his trade. As the PCO business became non-profitable, he shifted to cosmetics by opening a shop in Pratap Nagar area. Then he moved to selling CDs on the Lawrence Road. After sometime it also became a non-profitable venture and he opened a garment shop in a shopping tower.

Looking back at his past life, he said agony had a full share. “I was only three when my father Khajan Singh passed away. His elder unmarried brother had passed away when he was just 23 and his young handicapped unmarried sister also passed away at a very young age.”

So many setbacks in life did not shake his faith in humanity. He along with his friends floated Sri Guru Ramdas Welfare Society, which is providing monthly ration to 350 needy families. — Neeraj Bagga