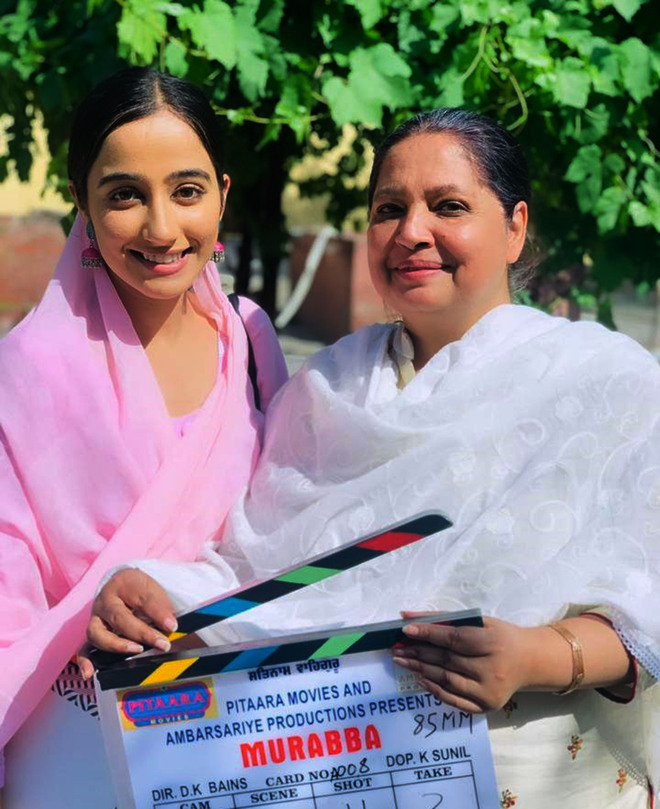 Latika (in white suit) on the sets of Murraba with one of her co-stars.

Making her acting debut in the Punjabi entertainment industry with the web series ‘Murrabba’, city-based artiste Latika Arora is currently riding high on the after receiving great response for her craft. A choreographer by profession, Latika recently ventured into acting during the pandemic and her first assignment was Ekta Kapoor’s web series ‘Who’s Your Daddy?’ on AltBalaji.

“It was a small role in Ekta Kapoor’s show that gave me confidence to face the camera again. For a woman well into her forties, choosing acting as a profession is not an easy decision. But I wanted to explore myself and take that risk,” she said. For her, the risk paid off as her web series Murrabba currently being streamed on Pitara TV’s OTT Platform Chaupal is getting good reviews. She stars along side celebrated actors of Punjabi cinema including Mahabir Bhullar, Preet Baath, Dheeraj Kumar and fellow Amritsari artiste Shamsher Dhillon.

‘Murrabba’ belongs to crime/thriller genre and Latika said that producing original OTT content is a perfect opportunity for Punjabi entertainment industry to break the mould. “We need to push good content through OTT platforms to change our image as an industry. Most of the Punjabi films and content is from romantic-comedy genre, which worked for a while but that was it. With the coming of OTT platforms and experimental work that is available on these platforms, I believe that it’s a good time for Punjabi entertainment industry to explore genres like horror, crime/thriller and dark Theme.”

As for ‘Murrabba’, she said it revolved around the theme of land mafia and human greed. “It’s a story where a piece of land becomes a reason for deaths of a lot of people. It is a commentary on human ambitions, greed and how a common man can turn into a criminal mastermind with just one act,” she said.