Built during the era of Maharaja Ranjit Singh, the structures now face defacement 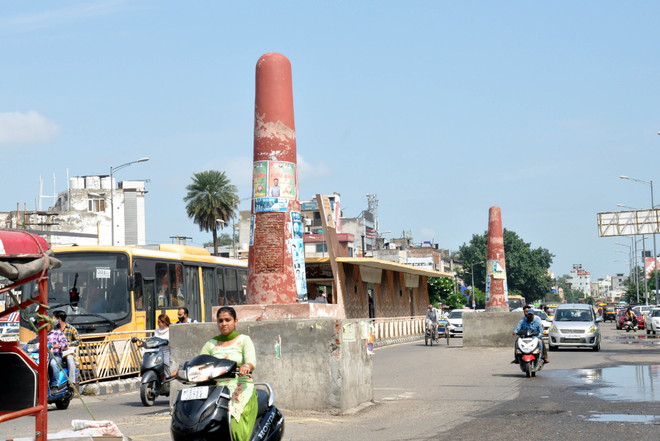 A Kos Minar on the GT road in Amritsar. Photo: Sunil Kumar

Two Kos Minars, which are remnants of Maharaja Ranjit Singh’s era and stand right in the middle of GT Road (near railway station), are a classic example of clash between heritage and urbanisation.

Kos Minar, were a concept of building milestones by Pashtun emperor Sher Shah Suri, on his journey through the original Grand Trunk Road in north India.

Several Kos Minars present in parts of Haryana, Uttar Pradesh and Delhi, were being maintained by the Archaeological Survey of India.

The ones in the holy city were built by Maharaja Ranjit Singh and present a bleak picture. Built in the early 18th century as markers from Ajnala to Gobindgarh Fort, only two among several Kos Minars survived the test of time and urbanisation.

The administration had never taken up the conservation of Kos Minars. The only work done on the two-heritage structures was carried out around two years ago. It involved building a concrete support structure around the Kos Minars to ensure strength and stability.

During the development of the Bus Rapid Transit System corridor, it was decided to remove these minars in order to widen the road. It was only after the protests by conservationists that the decision was taken back.

Former head of Sri Guru Ram Das School of Planning at Guru Nanak Dev University, Dr Balwinder Singh, had once shared his views on relocation of the Kos Minars for their preservation. He had said from the heritage point of view, the two Kos Minars of Maharaja Ranjit Singh’s era, were very important.

He had suggested that the best option was to relocate these two Kos Minars to the side of the road and install a plaque explaining their importance to make people aware.

Meanwhile, the two Kos Minars can be seen defaced by posters. While their history and heritage has been reduced to suit the rapid urbanisation, the Kos Minars still stand tall, with a faded pride and reminder of the glorious past.

IN A STATE OF NEGLECT