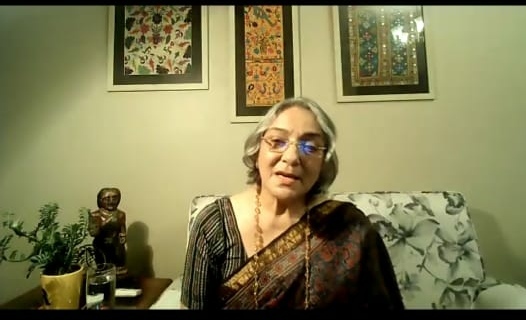 A story of love and hope set in the backdrop of undivided Punjab, Dusk over the Mustard Fields, was the centre of discussion at the Majha House’s digital forum.

Author Ranjit Powar explained the inspiration and emotions that went into writing the story of a 16-year-old protagonist Nimmo. She also spoke about the real-life experiences of her own family that were used as research for the book that released last year.

“Mustard fields have always been synonymous with Punjab and I had to use it in the title to convey an immediate and deep connect with the state and dusk of course is a metaphor for Partition that cast a pall of gloom over the people of the common Punjab, which continues even today after 74 years of the tragic event,” said Powar, who is a psychologist as well. In conversation with Dr Gurupdesh and Dr Gurpartap Khairah, she said her parents helped her with the details to bring authenticity to the book. “There is a lot of detail about the Army stationed at that time in Punjab. Segregation of the Army was an important issue those days and I have tried bringing that element out in the book. For this, I owe gratitude to my father, Lt Col Daljeet Singh, who served in the British Army. For the Punjabi touch, I turned to my mother Harsharan Kaur.”

Her book is also about the strong depiction of feminism through the story of her protagonist. Women were exploited in a number of ways. They were not allowed education, were sexually exploited by men and considered inferior. To survive, they had to resort to wiles and cleverness,” Ranjit explained. She also spoke about the segregation of society by class, which she has also highlighted in the book. “Caste system in those days was very firmly entrenched in the minds of people. The upper caste people did not like to come in contact with those from the lower caste but such is the hypocrisy of these people that they had no qualms about maintaining sexual relationships with women from the lower caste. Gender preference was also very prominent then; everyone hankered for a male child. And sadly, all these discriminations continue in our society even today, which makes the book, a historical fiction, relevant in today’s times also,” she concluded.