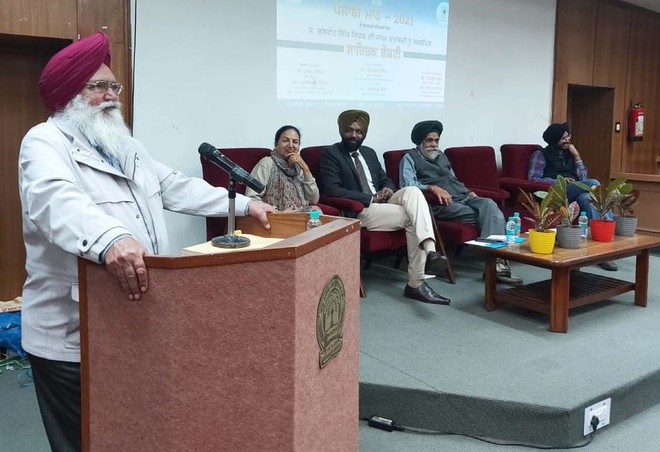 Organising a literary talk dedicated to the birth centenary of Kulwant Singh Virk, one of the most popular storytellers of modern Punjabi literature, the Department of Languages, Punjab, in association with School of Punjabi Studies, Guru Nanak Dev University, Amritsar, invited eminent Punjabi writers Dr Joginder Singh Kairon, Dr Dharam Singh and several others as they apprised the audience of Virks’ literary legacy.

Vice-Chancellor of Guru Nanak Dev University, Dr Jaspal Singh Sandhu, said, GNDU was fully committed to the development of Punjabi language, literature and culture, under which a special discussion has been held on the stories of Kulwant Singh Virk. Celebrated folklore scholar and former professor, School of Punjabi Studies, GNDU, Dr Joginder Singh called Kulwant Singh Virk the pinnacle of the Punjabi literature.

“His writings intended to change the social structure through criticism. He was never a silent observer. Whether it was the Partition that he witnessed painfully through his writings and otherwise or capitalism, his stories were real and daring.”

“His stories transcend time by proving the depiction of human existence, liberation from subjugation, presentation of the truth of time etc. as the basis of his story,” said Gurmukh Singh. Kulwant Singh Virk was hailed as a master storyteller who created a balance in Punjabi public life, captured the future in dynamic reality. Dr Manjinder Singh, another speaker, considers Kulwant Singh Virk to be one of the most popular storytellers of modern Punjabi literature, who has received the highest number of adjectives in the literary world.

He compared Virk to famous storytellers of other languages and considered Virk as a capable storyteller who created the story of humanity. Language Department, Punjab, released ‘Kulwant Singh Virk Special Issue’ dedicated to the centenary of Virk.