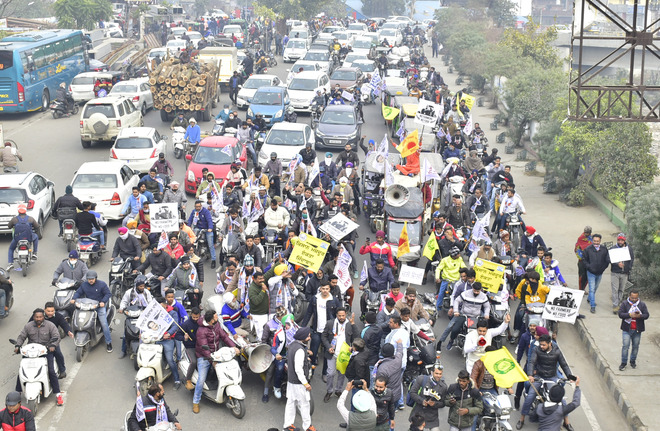 Aam Aadmi Party activists take out a bike rally in support of farmers in Amritsar on Saturday. Sunil kumar

The Aam Aadmi Party (AAP) organised a motorcycle rally in support of farmers’ January 26 tractor parade in Delhi here on Saturday. The party activists took out a motorcycle rally from the party office at Bhandari Bridge and proceeded towards Hall Bazaar and then Ward No.37 of the south constituency. The rally was led by state unit joint secretary Ashok Talwar, district president Parminder Singh Sethi and district secretary Iqbal Singh Bhullar.

Ashok Talwar said the party supported the tractor parade of farmers and they would be part of the parade in Delhi without the party flag. A large number of farmer activists voluntarily reached Delhi.

Owing to the Modi government’s arrogance, all the meetings proved futile. The BJP would have to pay the price for this attitude. The Capt Amarinder Singh government also joined hands with the BJP government at the Centre.”

Sohan Singh Naagi, district office in-charge, Jagdeep Singh, district event in-charge, Vikramjit Vicky, district media in-charge, Vipan Singh, district treasurer, Anil Mahajan and other senior leaders also addressed activists. Iqbal Singh Bhullar appealed to the residents of the district to be a part of the Delhi parade on January 26 so that the government could gauge the strength of people.

The AAP took out a motorcycle rally in support of agitating farmers and the proposed tractor march on the Republic Day in Tarn Taran on Saturday.

The rally started from Majha College for Women and ended on Jandiala road. Gurwinder Singh Beharwal said more than 200 volunteers participated in the rally with their bikes. He said a large number of activists were leaving for Delhi to take part in the tractor march.

He slammed the Centre for not repealing the three agri laws, which had been condemned by farmers across the country.