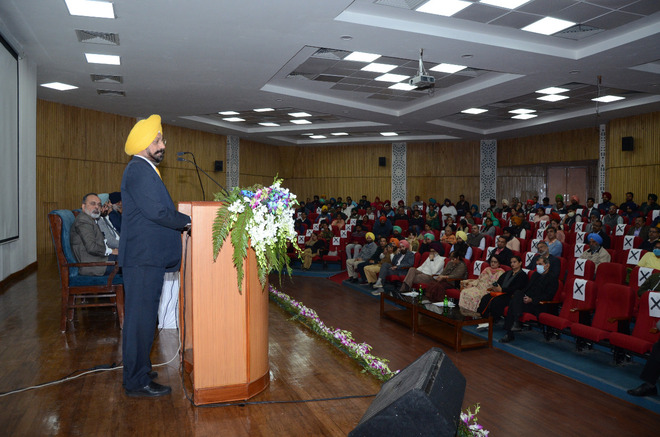 Guru Nanak Dev University celebrated its 52nd Foundation Day by hosting various academic and cultural activities. Academicians, scholars, students and eminent personalities participated in the celebration and a Guru Ka Langar was also arranged. Lok Virsa, painting and book exhibitions, were organised in front of Bhai Gurdas Library and in the Gallery of History and Dreams on the university campus.

The philosophical aspects of Guru Nanak Bani and Sakhis can lead the world academics because these aspects have lots of possibilities to inculcate the challenges regarding academics. Dialogue — a tradition given by Guru Nanak Dev was a pioneer of a pattern of interfaith understanding. He was in continuous dialogue with people of other faiths. The Siddh Gosht is an example of such dialogue that is enshrined in the Guru Granth Sahib. Dr Karamjit Singh, VC, Jagat Guru Nanak Dev University, Patiala

Dr Karamjit Singh in his lecture, said the philosophical aspects of Guru Nanak Bani and Sakhis could lead the world academics because these aspects have lots of possibilities to inculcate the challenges regarding academics. He said dialogue the tradition given by Guru Nanak Dev was a pioneer of pattern of interfaith understanding. He was in continuous dialogue with people of other faiths. The Siddh Gosht is an example of such dialogue that is enshrined in the Guru Granth Sahib.

“While reciting the Sakhi of Multan, Guru Nanak Dev explained that the pot full of milk signified that there were many religious teachers in Multan and the Sufis feared that adding one more would result in the displacement of another. But the Guru wanted to tell them that he had no intention of displacing anyone; he only wanted to add the fragrance of his teachings. Just as jasmine brought fragrance to milk,” he said. He said Guru Nanak Dev travelled to various religious places of diverse faiths with Bhai Mardana.

While delivering academic lecture on ‘Jammu & Kashmir – 1947-1953 Key Issues & Contemporary Understanding, Prof Raghuvenra Tanwar said the Princely state of Jammu and Kashmir was the largest among all such states in 1947, being located on the edge of the Indian sub-continent, it had borders with three countries.

“The state’s populace was largely Muslim (above 77 per cent in 1947) but the ruling family was Hindu. Kashmir had for ages been a part of the composite Indian frame. A shared language, a shared history, shared customs, shared food, dress and art, music and culture. It was the kingdom of the great Lalitaditya, the region where ancient Indian languages and scriptures flourished, the home of Shaivisism and the cradle of Hinduism and perhaps Buddhism as well,” he said. Prof Tanwar said history can’t be separated from geography.

In the evening, special Kirtan Darbar at the university Gurdwara Sahib was organised followed by langar.