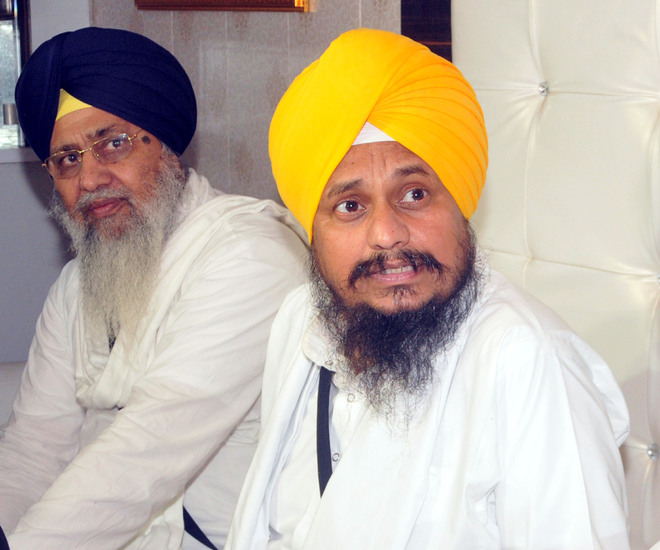 Giani Harpreet Singh had unveiled the statue of Saragarhi hero Havildar Ishar Singh in a park near the gurdwara.

More than the significance of the occasion, Akal Takht officiating Jathedar Giani Harpreet Singh’s recent UK visit has caught the attention after a “bogus” penalty notice, allegedly on a forged letterhead with a logo of the ACRO British Crime Records Office, against the management of Guru Nanak Gurdwara, Wednesfield, emerged on the social media.

The official unveiling of Wolverhampton’s historic Saragarhi monument took place in Wednesfield on September 12. Giani Harpreet Singh had unveiled the statue of Saragarhi hero Havildar Ishar Singh in a park near the gurdwara. Many dignitaries, including Members of UK Parliament and high profile army officers of the Britain army, had attended the function.

Giani Harpreet Singh had unveiled the statue of Saragarhi hero Havildar Ishar Singh in a park near the gurdwara. Many dignitaries, including Members of UK Parliament and high profile army officers of the Britain army, had attended the function.

The notice, dated September 14 and addressed to the trustees of the gurdwara, alleged that Giani Harpreet Singh had violated the UK’s Covid-19 protocol of self-isolation before appearing for a public gathering.

It read: “We have been made aware an individual named ‘Mr Harpreet Singh’ arrived in the UK from India… We are aware that Mr Singh (Giani Harpreet Singh) was ‘obliged’ under the coronavirus regulations to self-isolate for minimum of 10 days… we have been unable to contact ‘Mr Singh’ since his arrival... Please be advised that failure to adhere to the regulations is a serious offence, punishable with fines of up to 10,000 pounds. We are writing to you at this stage to formally request any contact details that you hold for Mr Singh or information as to where he is residing.”

Snubbing it, the administrator of UK gurdwara Paramjit Singh Dhadi, through a video message, said the inquiry was being conducted to expose the mischievous elements. In a clarification, ACRO Crime Record Office said it was not genuine. “We do not address FPNs (fixed penalty notices) to groups or third parties and never request contact details,” it said — TNS