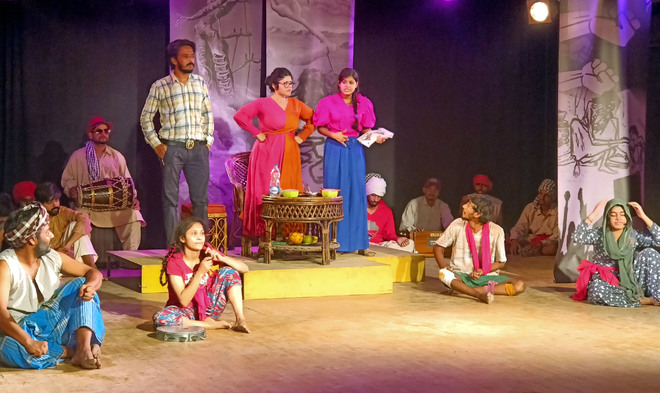 To culminate the 40-day National School of Drama workshop at Virsa Vihar, two back-to-back plays were staged by the Dastak Theatre. The first play, ‘Adjustment’ directed by Amita Sharma, was an adaptation of a short story by Gulzar. It was based on a theme of relationships and how they change and affect us in life and death. A story of a husband and wife, ‘Adjustment’ begins with a husband grieving for his dead wife. The man, who spent all his life fighting over trivial things with his wife, fondly remembers her after her death and misses her.

He recalls the things and habits of his wife that annoyed him and imitates them to keep her in his memory. The loneliness that usually is destined for a aged couple once their spouse dies, and his regret over not valuing his wife when she was alive, drives him to such an extent that he starts behaving like his deceased wife, eventually personifying her and calling himself by her name. He finally embodies her in spirit and physicality.

The second Play was by Rajender Singh titled ‘Bhukh Tey Agg Hai’ based on Krishna Baldev’s play Bhookh Aag Hai. The play is essentially a social commentary on the impact of hunger on human psyche and actions. Presenting a stark contrast between society, highlighting the class and economic divide and how it defines certain parameters of life, the play had serious undertones. A girl is asked by her teacher to write an essay on hunger, a concept alien to her, as she belongs to an affluent family. Never gone on hungry stomach once in her life, as the young girl tries to understand the concept of hunger, she experiences an incident that teaches her about hunger in a harsh way. One day she watches in horror as her parents are looted, robbed and left wounded by a group of beggars. That teaches her, what hunger is , and forms the climactic monologue of the play