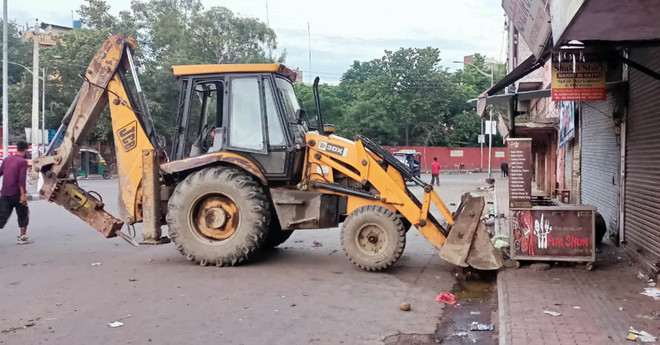 The estate wing of the MC removes encroachment on Friday.

A team of the estate wing of the Municipal Corporation (MC) led by Estate Officer Dharminderjit Singh conducted a demolition drive during which encroachment by a religious sect outside Shri Guru Ram Das Hospital were removed. The violators had illegally occupied the road by installing pillars and claimed ownership of the area. The estate wing team removed encroachment with a ditch machine.

Similarly, an illegally constructed kiosk on the road near Rambagh Chowk was removed by the MC. Several temporary encroachments were also removed on Majitha Road by estate wing employees.

Inspector Raj Kumar, Arun Sehajpal, the department staff and the police personnel were also part of the estate wing team that removed encroachments from various areas of the city.

A team of the MTP wing led by Narinder Sharma, Municipal Town Planner, and Angad Singh, building inspector, inspected five buildings on Airport Road. The facades and roofs of the five illgal buildings were partially demolished in the anti-encroachment drive.

Sharma said no illgal construction would be allowed in the city. The drive would continue in the coming days and more illgal buildings would be demolished, Sharma added.