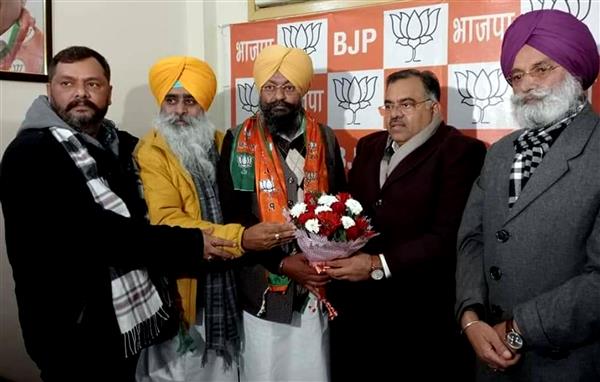 Sachar has been active in the constituency for quite some time now and was vying for the party ticket from here. Congress has fielded Jagwinderpal Singh, alias Jagga Majithia, cousin of Sukhjinder Singh Lalli Majithia, instead.

Following change of guard at the top level and Navjot Singh Sidhu becoming the PPCC president, Lalli Majithia was feeling side-lined. He had unsuccessfully contested from Majitha on a Congress ticket. The party people revealed that he was also upset as Sachar has increased his activities in the constituency for quite some time now. Upset over the recent developments, Lalli Majithia recently switched over to AAP.

Sachar remained DCC rural president three times besides remaining the vice-chairman of Zila Parishad. Speaking to the mediapersons, he said he was very upset as he was denied a ticket from Majitha constituency, which forced him to make this decision. He said he had joined the BJP without any condition and would work on any position.

“I remained a loyal worker of the party for the last 20 years, but was ignored while distributing tickets,” he said, adding that he was made a victim of groupism in the Congress party. He squarely blamed Punjab Pradesh Congress Committee president Navjot Singh Sidhu for not giving him the party ticket. He said he was closer to Majha brigade —Sukhwinder Randhawa, Sukhbinder Singh Sarkaria, Tript Rajinder Bajwa — which has gone against him. He alleged that due to Sidhu’s arrogance, many leaders were forced to leave the grand old Congress party.

Tarun Chug, while welcoming him, said every party wanted to increase its base and Bharatiya Janata Party also wants the same. We are including only those whose names are cleared by the screening committee of the party, he said, adding that in the 2022 Punjab Assembly poll, the BJP would bring a positive change in the politics of Punjab.