Hailing from a family of doctors, Anupreet was crowned 1st runner-up 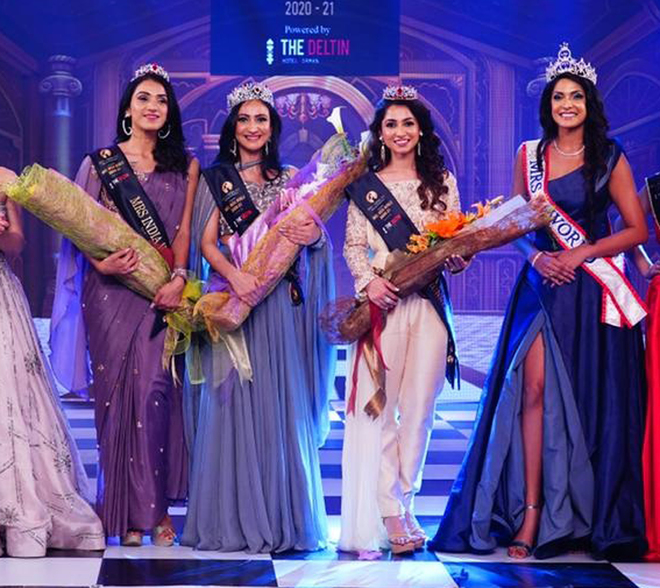 Dr Anupreet Kaur (2nd from right) along with other contestants.

City-based doctor and now a beauty queen, Dr Anupreet Kaur has bagged the title of 1st runner up at Mrs India World 2020-21 pageant. Hailing from a family of doctors, she is wife of Dr Shahbaz Singh, director, Amandeep Hospital.

Dr Anupreet will represent India on a global platform along with Mrs India World winner Navdeep Kaur from Orissa and second runners up wing commander Shruti Chauhan from Maharashtra.

A student of DAV Public School, Dr Anupreet is an accomplished Kuchipudi dancer as well. “It’s a moment of great pride to have shared the stage with several accomplished women and win the pageant,” she said. Having worked hard to achieve her goals, Anupreet said she aimed to empower women and enthuse confidence in them to display their real beauty and wisdom.

Standing five feet and four inches tall, she was told several times to take a shot at the glamour world. “I never really took it seriously and when virtual auditions for the pageant were organised due to Covid-19, I thought of trying my luck,” she shared. She was among the 56 semi-finalists shortlisted from the country. “It has been a life altering experience for me,” she says. Dr Anupreet has also bagged the title of Beyond Beauty India 2020-21 at the pageant.

She credited her success to her family members. “It was only due to the love and support of my family, specially my husband that I was able to win. Constant endeavours, a positive frame of mind throughout the competition and adapting to the fashion industry were the key elements that helped me win the competition,” she said.