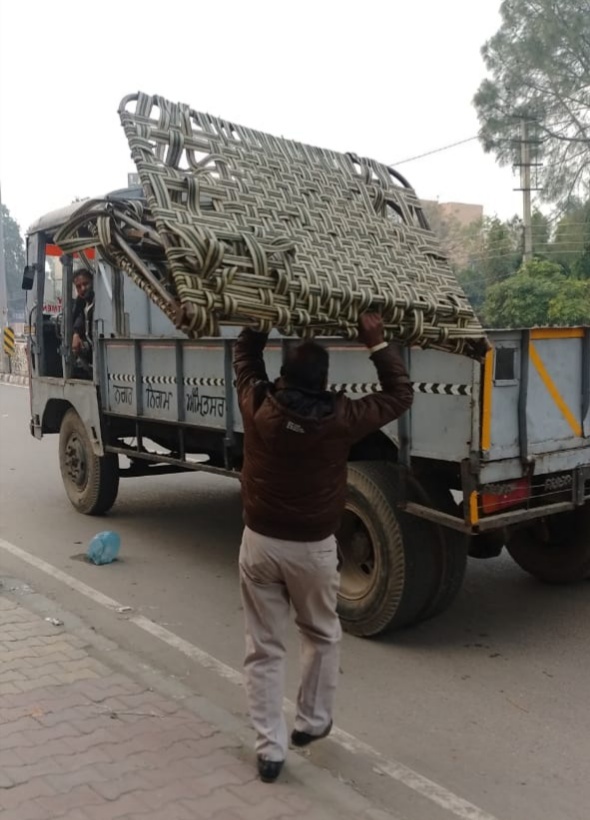 The MC seized goods and beds during a raid at ‘Som Bazaar’.

The Municipal Corporation’s crackdown on “weekly bazaars” continued on the second consecutive day.

The MC seized goods and beds from the Mall Road. Officials of the estate wing of civic body said these weekly bazaars were being run by mafia and mushrooming in the city.

Earlier, “Som Bazaar” used to be set up near Mahan Singh Gate every Monday. Now, more than six such bazaars were being set up throughout the week.

Two separate bazaars had been organised at the Mall Road and the Queen’s Road on Sunday. Markets where shopkeepers shut their shops on Monday also turn into Som Bazaar.

Such weekly bazaars can be seen at IDH Market, Saheedan Sahib Area and Chheharta. A permanent market has been set up at the Railway Link Road.

Targeting people from economically weaker sections and migrant workers, vendors use folding beds to sell goods. Officials claimed that most vendors in these bazaars were migrants.

Estate Officer Sushant Bhatia said, “Earlier, such markets were set up on one or two roads. Now, they are hindering traffic movement. We were soft towards vendors as they were from poor backgrounds. We found that these markets are being run by mafia. Some influential persons invest in these markets and earn good profit. So, we have initiated a drive against weekly bazaars and seized goods.”

Officlas from the estate wing claimed influential persons were approaching them to release their goods. Though the estate wing has waked up from a deep slumber and initiated action, but the police have failed to act against vendors who set up the bazzar outside the Police Commissioner’s Office on the Mall Road.