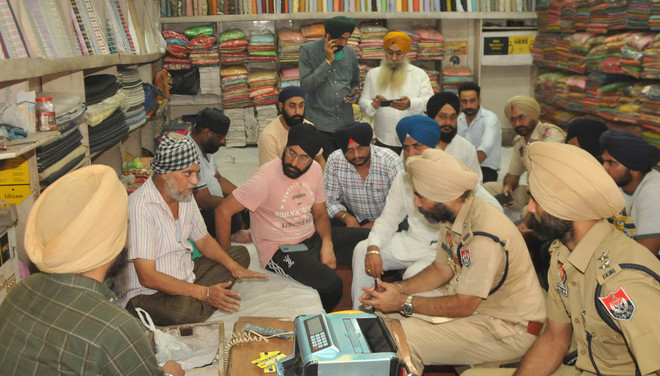 Cops conduct a probe at the cloth merchant’s shop from where miscreants fled with Rs15 lakh, foreign currency and a gold chain.

Four armed persons robbed a cloth merchant and his son, a money exchanger, of Rs10 lakh cash and foreign currency worth Rs5 lakh at gunpoint on Sunday morning. It took them just a few seconds to commit the crime and the accused managed to flee from the spot, which is just 100 yards away from the police station.

Ranjit Singh runs a cloth shop, while his son is into money exchange business at the same shop located outside the B Division police station at Sultanwind Chowk.

Four armed persons entered the narrow street and checked the surroundings. Then, three of them entered the cloth shop, while one stood outside to keep a check.

The shop owner claimed that immediately after entering the shop, they pointed pistols at them and asked them to give cash and foreign currency. Ranjit suspected that robbers were well aware as to where they had kept the cash and other things in the shop. They took Rs10 lakh cash from the trader and Rs1lakh from a customer, who was at the shop. Then the accused also snatched the gold chain from his son, who was sitting in the shop. The robbers did this all in 45 seconds.

The incident has been captured in a CCTV camera outside the shop. The cameras installed inside the shop were defunct. On being informed, a police team led by Additional Deputy Commissioner of Police (ADCP) Harpal Singh reached the spot and started the probe.

After the incident, the police sounded alert in the area but found no clues.

“All four accused were wearing masks. We have got the CCTV footage and recorded the statement of the trader. The investigation is on. We will trace the robbers soon,” the ADCP said.