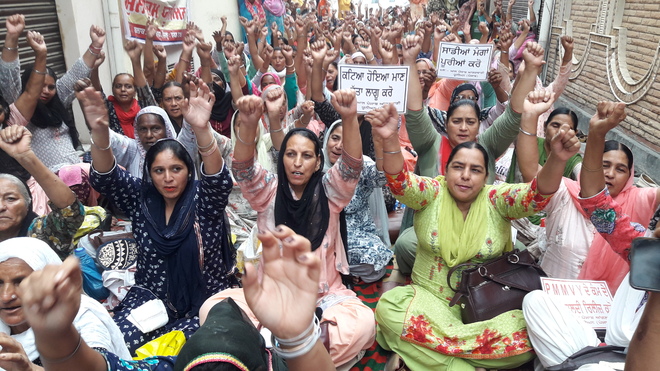 Anganwadi workers and helpers protest in Tarn Taran on Tuesday.

Anganwadi workers and helpers across the district under a banner of the All Punjab Anganwari Mulazam Union sat on a daylong hunger strike outside the residence of Congress MLA Dr Dharambeer Agnihotri on Tuesday.

Protesters submitted a memorandum (written with blood) addressed to Chief Minister Capt Amarinder Singh regarding their demands. Sandeep Agnihotri, son of the MLA, received the memorandum as the latter was not at his home.

Rajwant Kaur, district chief of the union, said their demands include to take back kids upto the age of six years sent from anganwadi centres to primary schools, nursery teachers’ post for anganwadi workers, remuneration to workers and helpers on the pattern of Haryana.

Protesters raised slogans against the state government and asked to address their demands at the earliest.