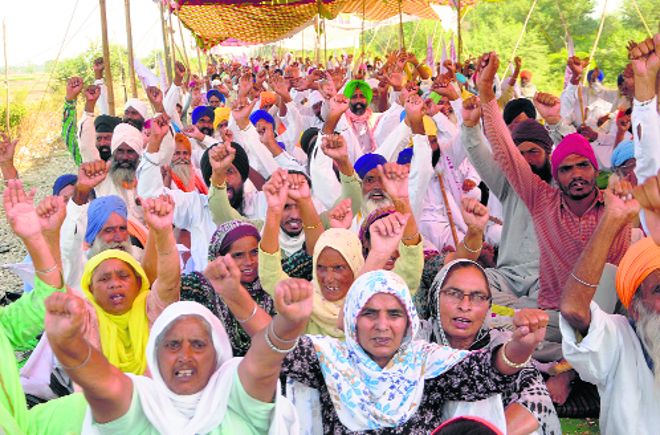 Farmers raise slogans during a protest at Devidas Pura near Amritsar on Thursday. Photo: Vishal Kumar

The farmers’ protest against three agriculture related acts brought by the Union Government has entered the 15th day at Buttari railway station near Beas. The protest being held under the collective leadership of 30 farmers associations had began on October 1.

The farmers stated that they were upbeat and would see to it that the protest reaches its logical end. The farmers also accused the state government and the Centre of being indifferent towards the plight of agrarian sector.

They alleged that the political parties had been trying to manoeuvre the agrarian society while their foremost priority remains to get mileage in the next Assembly elections in the state. Meanwhile, farmers and farm women are participating in large numbers in all protests being held across the state.

The protests are also being held outside the residence of BJP leader Shawait Malik’s residence and Devi Dass Pura village apart from toll plazas and petrol pumps of a private group.

The volunteers from various villages are helping agitators with langar at protest sites. However, with each passing day, the restlessness in farmers, especially the youth is growing and they feel that there is a need to intensify the protest.