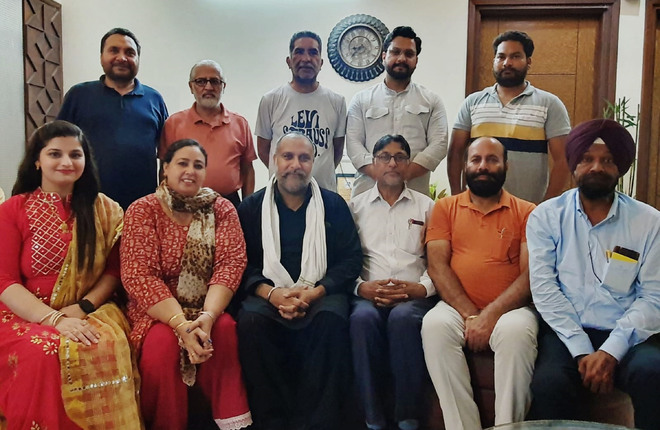 Members of the Janwadi Lekhak Sangh during a literary mehfil in Amritsar on Wednesday.

The Janwadi Lekhak Sangh on Wednesday organised a literary mehfil on the arrival of the first rains in the month of saavan. The month of saavan is considered significant in artistic fraternity as it symbolises fertility of ideas and rejuvenation of soul. Also, teeyan, a prominent monsoon festival, too, is celebrated during the season.

Conducting the event, storyteller and writer Deep Devinder Singh said such literary events give a sense of comfort, especially after a tumultuous year of death and destruction. “Just like the cool and soothing calmness that first shower of saavan brings after a hard, dry spell of summers.”

During the course of the compositions, poet Dev Dard and other eminent poets from the city Naseem Hurran, Hira Randhawa, playwright Narendra Sanghi from Canada, Suhail Macchiwara, Mohit Sachdev and others presented their kalaams and ghazals.

Popular actor couple, Anita Devgan and Hardeep Gill, too attended the event. From theatre background, both Devgan and Gill, who also run a theatre group, The Theatre Persons, said as soon as live events will be encouraged and organised, keeping in mind health safety, it will be good for revival of livelihood of those associated with the industry. It was also the first live literary event after lockdown and encouraged other artistes to organise more events to get the pace of cultural activities going.