Medical entrance examination was to start at 2 pm, but candidates reached centres at 11 am 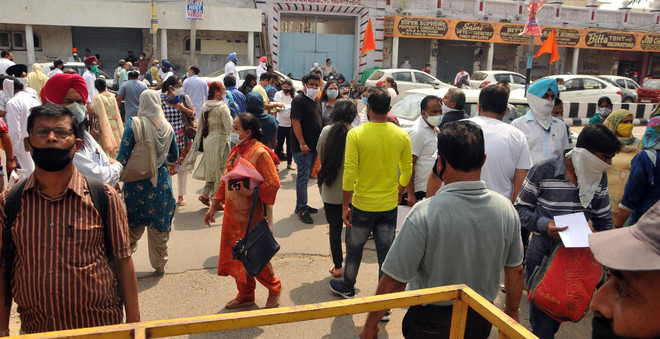 No distancing norms: Guardians of candidates wait outside a NEET examination centre in Amritsar on Sunday. Tribune photo: Vishal Kumar

NEET for entry into medical colleges was conducted in compliance with safety protocol at six centres here on Sunday.

The candidates queued up as per their designated time slots outside the centres. They were sanitised by the attendants who were not wearing PPE kits though it was said that the attendants would be in PPE kits while sanitising candidates. The exam was to start at 2 pm but they reached the centres at 11 am, as per the instructions.

Out of a total of 3,091 candidates, about 85 per cent took the NEET examination. As many as 515 teachers were appointed to conduct the examination. Twelve candidates were made to sit in each classroom as per the Covid-19 restrictions.

Prabhnoor Singh, a candidate, said it was tedious to write the descriptive paper while wearing the gloves. The hot and humid weather led to a lot of perspiration inside the gloves.

The guardians, who were waiting outside the six centres, were a disturbed lot as they were forced to wait in the scorching heat. They were neither offered potable water nor were any tents pitched to provide them shelter or protection from the sun.

Prabhat Kumar, a resident of Gurdaspur, said his daughter was to appear in the examination to secure a medical seat. He said it was a six-hour-long arduous wait for their children. It was a terrible experience which nobody would want to face again. Those candidates whose relatives lived in the city could go to their houses but others had no choice but to wait outside on the roadside.

Besides, most guardians did not follow the social distancing norm while waiting outside the centers. No government authority was visible to enforce the norm. Parents expressed their helplessness as they waited in the open braving hot and humid weather conditions.