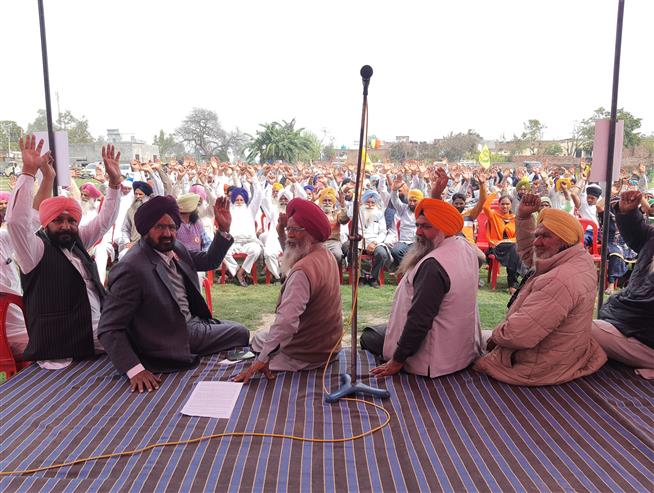 Farmers during a political convention near Ajnala on Sunday.

Farmers associations, under the banner of Sanyukat Samaj Morcha (SSM), organised a political convention at Jaus Mohar village near Ajnala on Sunday to mobilise support over the issue of Central government’s move to abolish Punjab’s permanent representation in the Bhakhra Beas Management Board (BBMB).

The SSM leaders stated that the Centre was trying to divert the attention of public from the core issues such as poverty, unemployment, corruption, health and education and were creating unwanted political issues. The leaders stated that though the Centre was encroaching upon state rights throughout the country, it is hell bent on discriminating with Punjab on every possible issue.

SSM leader and Jamhoori Kisan Sabha state president Dr Satnam Singh Ajnala said, “Now, the Centre has taken back the security of Bhakhra Dam from the Punjab Police and entrusted the job with central agencies. However, it would charge Rs 90 crore annually from the state for the job.”

He said the state would provide Rs 90 crore to the Centre even though its youngsters, if given employment, can provide better security than any other agency.

Speaking on the occasion, political and economic analyst Prof Jagroop Singh Sekhon said the move is a direct attempt to dilute the powers of the state and tamper with federal structure of the country. He said the farmers and people, in general, need to rise up against the Centre on this issue and guard their rights.

Border Area Sangarsh Committee leader Rattan Singh Randhawa said the BJP should not pursue conflict politics with the state as it is not in the interest of the people as well as the nation. “The government is more concerned with the corporate than with the people who want to live a dignified life,” he said.

The SSM has also announced to hold a protest outside the Deputy Commissioner’s office on the BBMB issue on Monday.