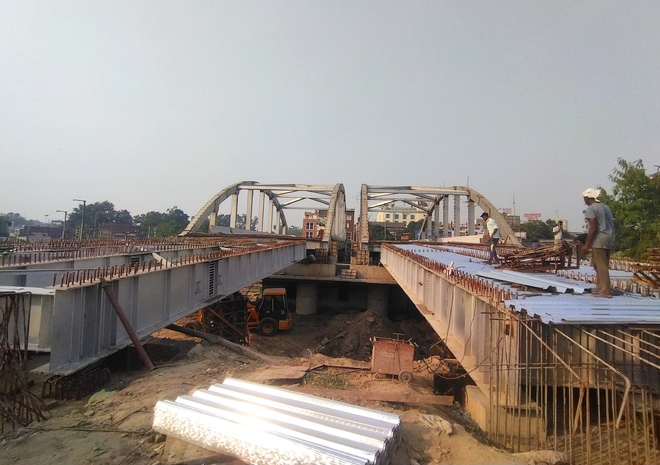 Civil work involving construction material and steel occupies much of the ramps of the crucial ROB, which is considered the lifeline of the city, leading to traffic snarls. Photo: Sunil kumar

Commuters have been facing inconvenience due to traffic bottlenecks around the ROB for the last nearly two years. Civil work involving construction material and steel occupies much of the ramps of the crucial ROB, which is considered the lifeline of the city. The railway lines leading to the Amritsar railway station, divide the city into two halves. In one half is situated the walled city, which houses the world famous Golden Temple, traditional markets and residences and the other half accommodates the Civil Lines area.

Naresh Johar, a senior citizen, says: “Bhandari ROB serves as the city’s lifeline and any prolonged repair work or creation of traffic bottleneck over it adversely hits the flow of traffic in the entire city. Instead of completing the work on a priority, it has been dragging on for too long.”

After linking the BRTS loop with the Bhandari ROB, traffic on the bridge increased manifold, resulting in traffic chaos. Even then, no halt to the BRTS buses was given on the bridge, much to the inconvenience of commuters, due to lack of adequate space. For this, the Amritsar Improvement Trust gave the responsibility of constructing two additional lanes of 31-ft each at a cost of Rs14 crore to a private concern.

Officials at the construction site said the construction of the ROB was progressing and was in its last phase. They said due to the Covid-19 restrictions, several machines required for the project could not reach on time, thereby causing the delay.