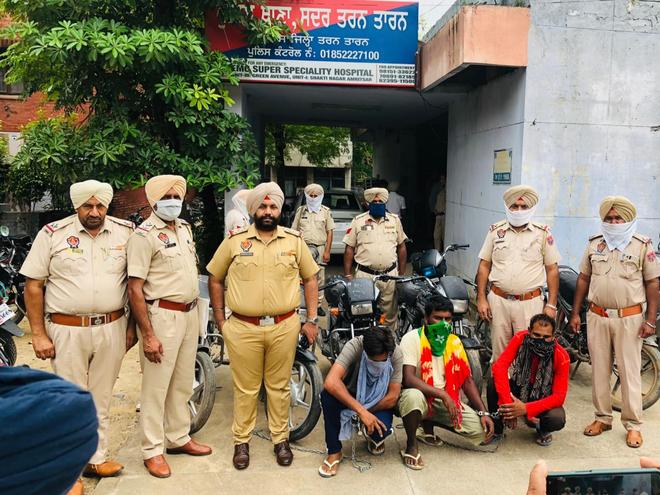 The three vehicle lifters in the police custody in Tarn Taran. Photo: Gurbaxpuri

The Sadar police have arrested three persons, who are members of bike lifters’ gang, and recovered nine stolen motorcycles from them.

Inspector Prabhjit Singh, SHO, on Wednesday, said the accused have been identified as Sahib Singh Saba of Manochahal Kalan, Angrej Singh of Shahabour Dial and Kuldeep Singh of Sabhra.

The SHO said Sahib Singh and Angrej Singh were nabbed from a naka installed at the outskirts of Manochahal Kalan on Tuesday with a stolen bike with fake RC. The accused in the preliminary interrogation revealed that they got the motorcycle from Kuldeep Singh, who, too, was a member of their gang. The gang had lifted bikes from different places of the town. They used to sell these to innocent people with fake RCs.

A case under Sections 379, 411 and 473 of the IPC was registered by the police. The SHO said the accused were produced in court, which sent them to three-day police remand.