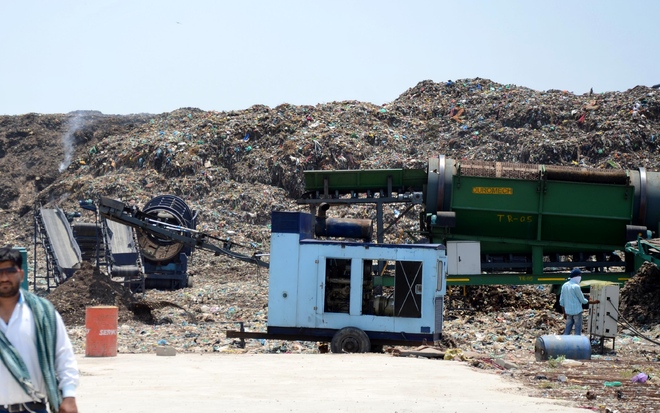 The firm was reportedly not getting a buyer for the refuse derived fuel, which slowed the speed of processing.

The work related to bioremediation initiated by Averda, a solid-waste management firm hired by the Amritsar Municipal Corporation, has been going on at a snail’s pace at Bhagtanwala dump yard. The MC had targeted to process 10 lakh MT garbage in two years, but things on the ground were quite opposite.

The firm has been using trimble machines and ballistic separators for segregation of waste. The refuse derived fuel (RDF) segregated from garbage was being stored at the dump yard. The firm was reportedly not getting a buyer for the RDF, which slowed the speed of processing.

The MC officials said the RDF would be sent to cement factories. The company has a plan to install an energy plant after processing the waste.

Municipal Health Officer Dr Ajay Kawar said, “The bioremediation work is under way and all machines are now functional. Earlier, there was some issue with lifting of the RDF, but now it’s being transported to Delhi. We hope that the company will process the garbage within stipulated time.”

Meanwhile, office-bearers of the Sanjhi Sangharsh Committee who had been protesting to shift the dump, expressed dissatisfaction over bioremediation.

Sanjay Sharma, general secretary, Sanjhi Sangharsh Committee, said, “Bioremediation is an eyewash and garbage is going nowhere. The firm has burnt the garbage instead of processing it. Congress leaders, including Capt Amarinder Singh, Manpreet Badal, Navjot Singh Sidhu, Gurjit Singh Aujla and Inderbir Singh Bolaria had promised to shift the dump. They should shift it as bioremediation is not a solution.”

Noting the allegations raised are serious nd pertain to purc...