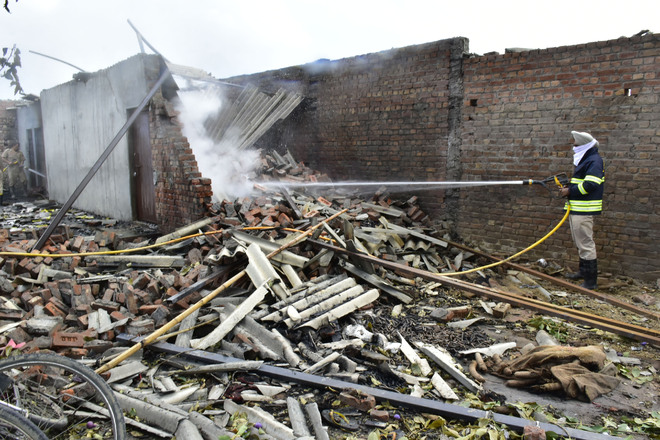 A massive explosion took place in a store of a firecracker factory in the Ibban Kala area here on Saturday morning. The sound of the blast was heard around two kilometers away from the factory. A wall of the factory collapsed due to the explosion. However, no loss of life or injury was reported in the incident.

Officials of the Fire Department informed that they had received information about the incident at 9.55 am and a fire tender was immediately sent to the spot. Three fire tenders were sent later.

Station Fire Officer Lovepreet Singh said it took the officials half an hour to control the fire but five hours to extinguish it. With the help of modern equipment and fire safety kits, the fire personnel entered the affected area and extinguished the fire.”

The officials said there was a large number of crackers and potassium stored in the factory. A portion of the factory was damaged due to the blast while the rest of the part where firecrackers were stored was saved by their timely action.

Workers at the factory said when they switched on the pump in the morning sparks occurred in the wires. This led to a blast and fire in the factory. The villagers present on the spot said the impact was so strong that glass panes of some houses were also broken. “Such blasts have also taken place here in the past,” they added.