Was kidnapped by two persons from Golden Temple 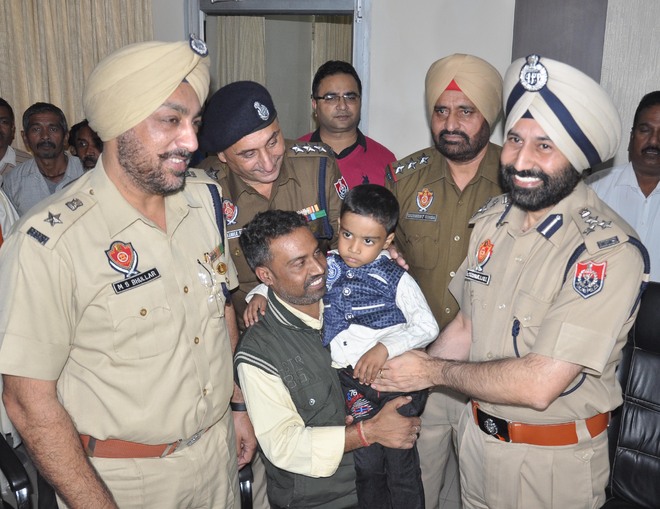 Back home: Police Commmissioner Dr Sukhchain Singh Gill hands over the recovered child to his father in Amritsar on Friday.

Aditiya (4), who was kidnapped by two persons from the Golden Temple on Sunday, was reunited with his family on Friday. The police recovered the boy within 72 hours. Police Commissioner Dr Sukhchain Singh Gill said the police worked round the clock to find clues about the suspects, who had abducted the boy. “It was a challenge for the police and I am happy that they safely recovered the boy,” he added.

The Police Commissioner said they had come to know that the accused had gone to the railway station and they were seen on a rickshaw with the boy. With the help of call details, it was found that they had gone to Faridabad. Later, the accused were arrested and the boy was recovered.

The accused have been identified as Sukhwinder Kumar of Batala and Asha of Faridabad. Asha told the police that she had two daughters and wanted a boy. She said Sukhwinder was her friend and they took the boy to Faridabad.

Victim’s father Raj Kumar told the police that on Sunday, he, along with his family, had gone to the shrine to pay obeisance. He said they had developed friendship with the suspects. They came out of the langar hall and on reaching near the Teja Singh Samundri hall, Aditya expressed desire to go to the washroom.

Raj Kumar said thereafter, Aditya went missing. The victim’s father said they searched his son in the entire complex, but to no avail. Later on examining the footage of CCTV cameras, he found that the suspects had taken Aditya along with him.