‘Bridge’ that can make or break elections 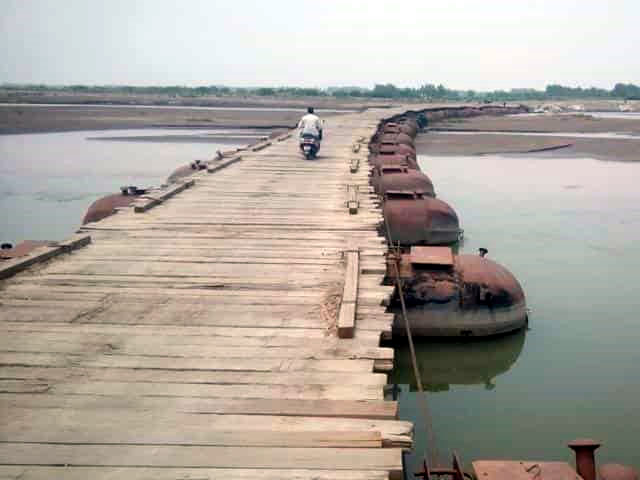 The 800-metre-long Makkoran Pattan pontoon bridge has become a favourite tool for politicians to fool gullible villagers. The bridge connects mainland Gurdaspur to a cluster of 12 villages located across the Ravi. During the monsoon season, this is dismantled by the PWD for fear of being washed away by the swirling currents of the Ravi following which boats are pressed into service. Previous Gurdaspur MPs Sukhbans Kaur Bhinder, Vinod Khanna and Partap Singh Bajwa promised the electorate that they would get a permanent structure built. Even incumbent parliamentarian Sunny Deol has given a similar assurance. Once they garner votes, they forget their promises. In any case, the previous MPs knew and even Deol knows that the Army will never allow a concrete bridge to be constructed. Reason is that the international border is very near to this cluster of villages. Despite knowing that the Army will not budge, still leaders make tall promises. Even during the 2017 Assembly elections, MLA candidates of almost all political parties for the Dinanagar Assembly seat promised to look into the issue. A little secret is that they never told the voters that it is not within the jurisdiction of an MLA to get the project started. Because of the adjoining border, the venture has to get several clearances from Central government agencies. This is a perfect case of pulling wool over the eyes of naïve villagers all in the name of getting some votes.

The Punjab DGP has issued instructions to SSPs to ensure BJP leaders get adequate protection in the wake of the recent vandalisation of Punjab BJP chief Ashwani Sharma's car. A few years ago, when Khalistani sympathisers targeted Hindu leaders, many BJP leaders were given security. However, a majority of them refused to take bodyguards putting the cops in a piquant situation. Their contention was that it was not possible, and plausible, for them to provide the cops boarding and lodging 24 into 7. The threat to their lives was real but they would not touch the security issue even with a bargepole. In Gurdaspur, as many as nine security men were assigned to a district level leader whose only mode of transportation was a scooter. It was hilarious to see three cops riding pillion while the leader himself drove the two-wheeler. A few days later he sent in a request to the SSP asking him to withdraw the security paraphernalia. The petition, in any case, was denied. For nearly one year he had to feed his unexpected guests from his own pocket. This time, too, the portents look the same. Some BJP politicians have gone on record as saying that they will not take security. But sources say this time they will have to because the cops are sure to thrust it upon them with the farmers' agitation threatening to go against the BJP. The attack on Ashwani Sharma is a case in point.

With the Supreme Court and the National Green Tribunal (NGT) threatening punitive action against farmers burning paddy stubble, Cabinet Minister Sukhjinder Singh Randhawa and Gurdaspur SSP Rajinder Singh Sohal joined hands to ensure the area does not end up going up in flames. The minister's interest stemmed from the fact that scores of villages of his assembly seat of Dera Baba Nanak fall in the jurisdiction of Gurdaspur police district. Both issued an appeal to all 659 villages asking, rather requesting, sarpanches to ensure not a straw of paddy was burnt. The SSP even went to the extent of sending messages on social media sites warning farmers. The appeal had a dramatic impact. As many as 658 villages passed resolutions asking farmers to refrain from lighting a match. Only one village did not adhere to the request because the sarpanch did not get along with his fellow panches. That village, falling in Kalanaur police station, was an exception. SSP Sohal had an interesting explanation to offer. "The rule is that no village burnt straw. The village in Kalanaur was an exception. And it is always an exception that proves a rule," he said. The other interesting aspect was that even SAD dominated villages listened to what Randhawa, a dyed-in-the-wool Congressman, had to tell them. "A lot of farmers listened to me. I propounded the logic that the heat from burning straw penetrates deep into the soil and kills bacterial and fungal populations critical for a fertile soil. Due to the loss of 'friendly' pests, the wrath of 'enemy' pests increases manifold and consequently crops are more prone to disease," he educated farmers. Not only Gurdaspur police district, even in the neighbouring police district of Batala, not many fires were reported.

Two Gurdaspur leaders who have been vocal in their attack on the NDA-led Union Government on the farm laws issues are the father-son duo of veteran trade unionist and senior Congressman MM Singh Cheema and Amardeep Singh Cheema, Chairman of the Punjab Health Systems Corporation (PHSC). Both are known Congressmen and their loyalty to the party is well known. Amardeep has also remained a member of the general body of the Indian Council of Agriculture Research (ICAR). He is a progressive farmer hailing from Batala. "I fail to comprehend how Smriti Irani and Anurag Thakur can solve the problems emanating from the farm laws. I doubt they can even tell the difference between seeds of wheat and paddy. It clearly shows that the Union Government is least interested in solving this agrarian problem.