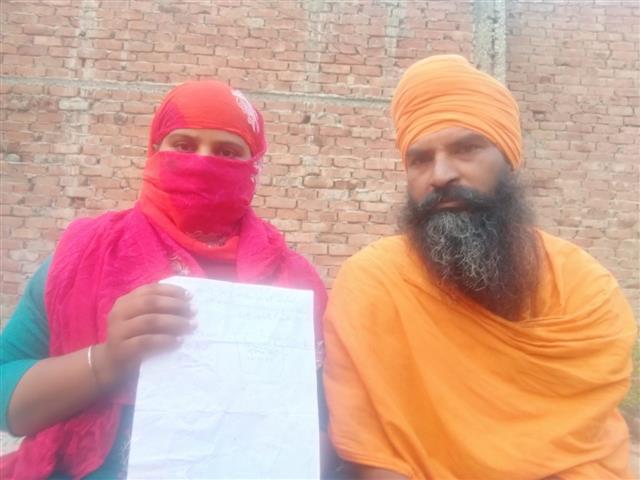 The victim with her husband.

The Khalra police on Sunday booked three persons, including a BSF officer, for threatening a married woman of border area Wan Tara Singh to establish physical relations with the BSF officer. Besides the officer, two other accused have been identified as Nishan Singh and Gurjant Singh of Wan Tara Singh village.

The accused had been calling the victim since September 22 onwards to establish physical relations with the officer otherwise she would be implicated in a criminal case.

The victim said they had been harassing her since September 22 and she lodged a complaint with the Khalra police one and a half months ago, but the police were not ready to redress her grievance. She said she had to move from pillar to post get a case registered against the accused.

The BSF officer has been identified as Vijay Kumar of the G-branch of BSF at Wan Tara Singh. The victim in her complaint to the Khalra police stated that the accused had been calling from the BSF officer’s mobile phone on her mobile phone pressuring her to establish physical relations with the officer.

ASI Satnam Singh of the Khalra police station said a case under Sections 419 and 294 of the IPC had been registered against the accused and further investigation was on.