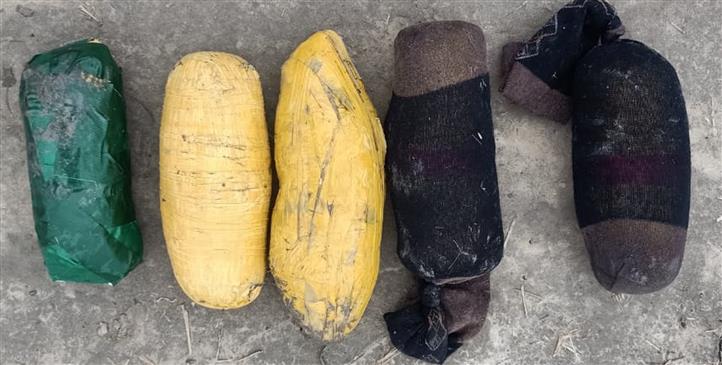 Amritsar: The BSF seized 4.76-kg heroin smuggled from Pakistan near the Indo-Pak border in Amritsar here last night. It also seized 1.3-kg heroin from the Ferozepur sector. In a statement, BSF authorities said despite adverse climatic conditions, the BSF jawans were alert and foiled the smuggling bid by nefarious elements across the border fence. They said in Amritsar sector, the contraband was wrapped in five packets while in Ferozepur, it was wrapped in two packets. TNS

Amritsar: Three unidentified armed persons robbed a woman of her scooter by brandishing a sharp-edged weapon here on Wednesday. Victim, Paramjit Kaur, told the police that the accused, who were on a bike, intercepted her near the Ranjit Avenue police station. They pointed a dagger at her and asked her to hand over the scooter (PB-02-DA-4026) to them. They fled with her scooter. The police have registered a case. TNS

One arrested in snatching case

Amritsar: Ranjit Avenue police arrested a snatcher, identified as Jaskaran Singh, alias Chan, of Shamsherapura village falling under Ghaniye Ke Bangar village in Gurdaspur on Wednesday. His accomplice Amritpal Singh of Majjupura village managed to abscond. The complainant, Jeevan Khanna, alleged that two unidentified bike-borne persons had snatched his bag at gunpoint. A case under Sections 379-B (2) and 34 of the IPC was registered in this regard. Probe led to arrest of one of the accused.