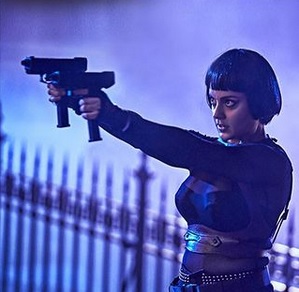 One of the looks shared by Kangana. Instagram/kanganaranaut

Last seen as J Jayalalithaa in Thalaivii, which garnered huge response, Kangana also has Tejas in line where she will be seen playing a woman pilot in the Air Force. Now, the actress took to Instagram to announce the release date of her next, ‘Dhaakad’.

Sharing her four looks from the spy-thriller where she will play the role of Agent Agni, Kangana also gave a brief about her character as she wrote, "She is fierce, feisty and fearless. #AgentAgni is all geared up to set the big screen on fire. Bringing to you the action spy thriller #Dhaakad that will hit theatres on 8th April 2022!"

A picture shared by Kangana months ago that gave a glimpse into her character in the film.

The film is directed by Razneesh Razy Ghai and also stars Arjun Rampal and Divya Dutta in important roles. It was in January last year that the first posters of the films surfaced on the internet. The film is said to have been shot in Madhya Pradesh and Budapest.

Here are some shots from the making of the film shared by Kangana on her Instagram:

Dhaakad, a film on child trafficking and women exploitation was earlier scheduled for October release this year but was postponed due to the pandemic. In fact, Kangana had also shared it on her Instagram.

According to the team, Dhaakad is being made on par with international action films and Kangana says it is not only a benchmark for her career but a film that will set new standard in Bollywood

‘Dhaakad’ is produced by Deepak Mukut and Sohel Maklai.

India will continue to do what is best in interest of own energy security: Modi at G7 Summit in Germany