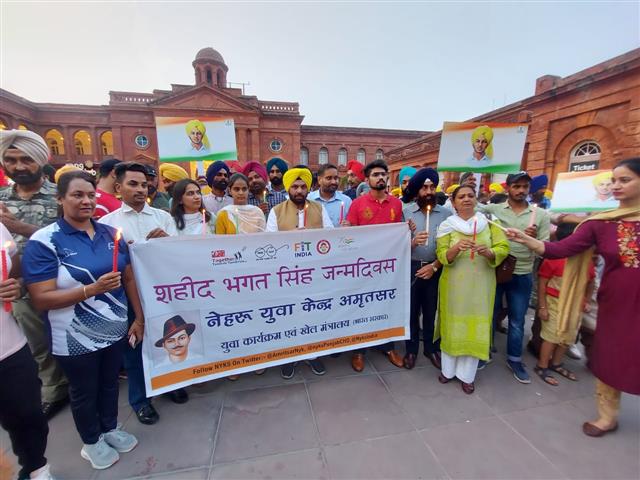 Leading a candlelight march from Jallianwala Bagh to Partition Museum, the Cabinet Minister called upon students, NGOs, eminent artists, citizens and members of civil society to imbibe the ethos of Bhagat Singh’s ideology and remember his relevance over generations. “It is very important to celebrate martyrs’ day to keep their memory alive and to fulfil their dreams. For the first time in Punjab, the birth anniversary of Shaheed Bhagat Singh has been celebrated with such zeal and enthusiasm. Participation of people in such programmes is a testimony of the future change,” he said, while addressing the procession. He also called Bhagat Singh and Bhim Rao Ambedkar as two biggest heroes of India’s nationalist movement.

Slogans of “Bhagat Singh Teri Soch Te Pahira Deange Thokke” echoed as a large number of students, from schools and colleges led the procession, engaging visitors and tourists with them. Harbhajan Singh ETO also visited the Partition Museum and paid homage to those who lost their lives during the Partition.

Earlier, police personnel of Punjab at the district administrative complex held a salute ceremony in honour of Shaheed Bhagat Singh, which was attended by DC Harpreet Singh Sudan, Commissioner of Police Arunpal Singh and several AAP leaders. A cycle rally from the Company Bagh to Fort Gobindgarh was also flagged off in the morning by Additional Deputy Commissioner Surinder Singh. About 150 school students and NCC cadets participated in this rally.

The GNDU also organised a run for freedom and cycle rally to mark the 155th birth anniversary celebrations of Bhagat Singh. Prof Anish Dua, Dean, Students Welfare, flagged of the rally and inspired the participants, which also had some university sportspersons and Fitness club mentors. Prof Dua while speaking on the occasion said good health and well-being of all is essential for the nation’s development and this fact was also stressed by Bhagat Singh in many of his writings.”

The All India Anti-Terrorist Front’s, Amritsar unit, organised a tribute ceremony mark the birth anniversary of Shaheed-e-Azam Bhagat Singh. General secretary of the Anti-Terrorist Organisation, Punjab, Pawan Saini and its members hailed the renaming of the Chandigarh airport on the name of Bhagat Singh. “In today’s era, the alliance of terrorists, gangsters and smugglers is a great threat to the unity and integrity of the country. We must unite as a country to contribute in the efforts to tackle these divisive powers as Bhagat Singh propagated,” said Saini.