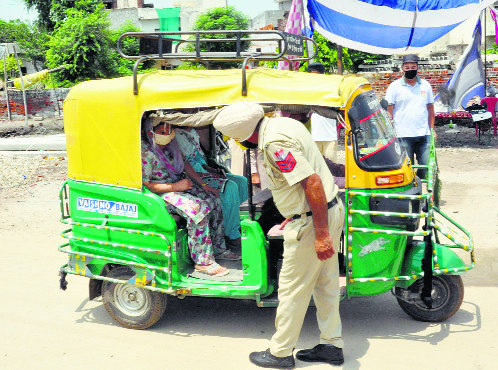 A policeman checks violation of social distancing norms in an auto-rickshaw in Amritsar. Photo: Sunil Kumar

The auto-rickshaw drivers have been fleecing the passengers in the name of maintaining social distancing in their vehicles by following the instructions of administration in the city. The standard fare of auto-rickshaws, which was earlier Rs 10, has now been doubled for most of the city routes. The drivers charging Rs 20 from Bypass road to Bus Stand at Balata Road, GT Road, Majitha Road, Fathegarh Churian Road and Ajnala Road.

It is burning a hole in the common man’s pocket. The workers, who have to commute to the city for small jobs, are the major sufferers. They are unable to pay Rs 20 for a small ride of three to five kilometers.

Meanwhile, the auto drivers claimed that Rs 10 for one ride is no more viable as the police did not allow them to ferry with more than four passengers.

“The diesel prices have witnessed a steep rise in the past. We need at least seven to eight passengers for a trip. This way, we used to earn Rs 70 for a distance of five to ten kilometres. During pandemic, it got reduced. The administration has put several restrictions on us. So it is no more viable to ply the vehicle for just for Rs 40. Hence, we had no other option but to increase the fare. Moreover, the number of passengers also decreased as people avoided going outside,” said Mangal an auto rickshaw driver.

However, the auto-rickshaw drivers can be seen violating the social distaining and accommodating seven to eight passengers. The cops issued a challan to the violations.