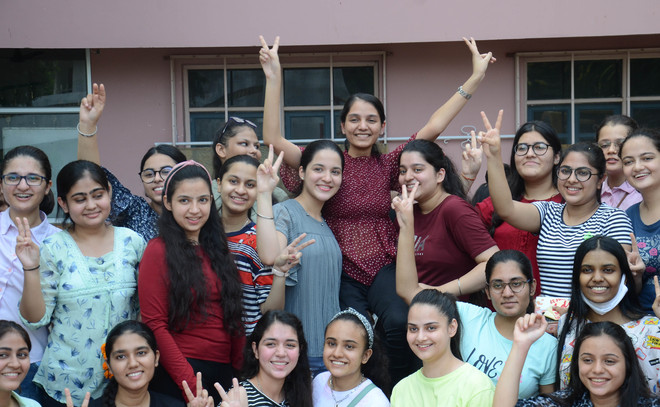 District topper Vanshika Aggarwal (maroon top) of DAV Public School being flanked by her friends after the CBSE declared the Class XII results, in Amritsar on Friday. Sunil Kumar

CBSE Class XII students celebrated their results with a sense of relief and smiles that finally washed off the uncertainty and stress of the past one-and-a-half years.

“I feel relieved. I had a sleepless night in anticipation of the result. Now that it’s out, I feel like a burden has been lifted. We can finally move forward,” said Vanshika Aggarwal, a student of commerce stream from DAV Public School, who stood first in the district with 99.8 per cent.

Gagandeep Kaur from Senior Study II stood second in the district with 99.6 per cent. A student of commerce stream, she scored a perfect 100 in economics, business studies. Shubhpreet Kaur (humanities) and Harmanpreet Kaur (commerce) of Sri Guru Harkrishan Public School, secured 99.2 per cent in the CBSE Class XII and shared the third position in the district.

Overall, many students managed to cross the 99 per cent mark in the city schools affiliated to the CBSE. Spring Dale School’s Pranati Peshawaria from humanities and Maanit Pratap Singh from non-medical topped their school with 99 per cent.

Stream-wise toppers in the city

Shubhpreet Kaur of Sri Guru Harkrishan Public School bagged the top position in the city in humanities stream by scoring 99.2 per cent marks, followed by Pranati Peshawaria from Spring Dale School with 99 per cent and Priyanka Bhalla of DAV International School also scoring 99 per cent.

As far as medical stream is concerned, the maximum score in the stream was 98.6 per cent marks by Anushka from Bhavan’s SL School followed by Karsh Verma of DAV Public School with 98.2 per cent and Vridhi Dua of DAV International School who scored 97.8 per cent marks.

The Class XII results were declared by the Central Board of Secondary Education (CBSE) on Friday. In Tarn Taran district, girls outshined boys in most of the schools affiliated to the CBSE.

Principal Dr Raman Dua said Manbeer Kaur secured 95.6 per cent and Ridham secured 93.8 per cent in the non-medical stream. In medical, Harnoor Mallhi got 95.2 per cent and Sanchi got 91.45 per cent. The Principal said Harleen Kaur by securing 93 per cent and Agyapal Singh with 91.4 per cent remained the toppers in the school in the commerce stream.