CCTVs lie defunct, police find it tough to get clues 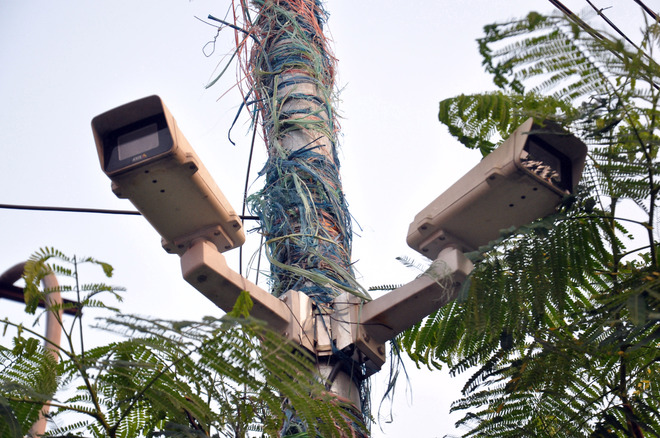 The cameras are dysfunctional since the past three months due to non-renewal of contract with a private firm hired to maintain them.

Though the city is witnessing an upsurge in crime, CCTV cameras installed at various key points lie non-functional and the authorities do not seem to be concerned over the issue. These cameras have been lying in defunct state for the past three months due to non-renewal of contract with a private company engaged to maintain.

Nevertheless, the police are still groping in dark in a sensational robbery case, in which unknown armed assailants had looted a jeweller of gold ornaments worth over Rs1 crore, a week ago. Police officials claimed that they would have definitely found clues regarding the robbers, had the cameras been operational.

The Amritsar Improvement Trust has called a meeting of its officials on Thursday to discuss the issue. While much awaited safe city project announced in 2014 by the state government never saw the light of the day, the project regarding CCTV cameras to be installed in the civil lines areas was inaugurated in 2016 by the then Local Bodies Minister Anil Joshi. Around 220 cameras were installed at 40 locations in the city. The cameras can capture images from as far as 1 km with a great clarity.

The non-operational cameras have made the police dependent on poor quality of cameras installed by local residents. Due to this, the police failed to find clues in the incident that shook the residents of the holy city.

“CCTV cameras deter crime as the police can track the perpetrators by examining the footages from these cameras. However, for the past around three months, the police have been facing troubles in cracking cases while anti-social elements are striking at regular intervals,” admitted a senior police official while wishing not to be named. He said the state government should allot requisite funds for the maintenance of cameras.

Police Commissioner Dr Sukhchain Singh Gill said the matter was in his knowledge and efforts were being made to make the cameras functional again. We are taking up the issue at appropriate levels, he added.

Though earlier, the Amritsar Improvement Trust dragged their hands from funding the project while stating that they had handed over the project to the city police and not it was their duty to maintain these cameras. Now they are having second thought over it.

AIT Chairman Dinesh Bassi said a meeting has been called tomorrow to take a call on the issue. He said the CCTV cameras would be maintained under the Smart City project and until that happened, we would see what could be done.