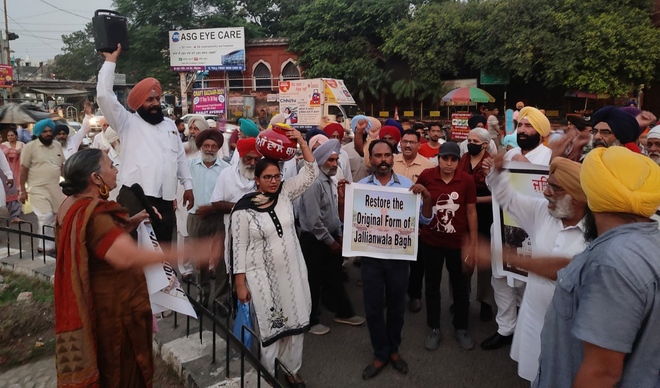 Members of the Citizens’ Forum raise slogans against the Central Government in Amritsar.

Residents from different sections of society, under the banner of the Citizens’ Forum, organised a protest march on Saturday to express their anguish against changing the original character of the Jallianwala Bagh.

Prior to the march, a seminar was organised at Bhandari, in which teachers from Guru Nanak Dev university, advocates, writers, students and women activists, expressed their concerns over the issue.

Speakers said the Desh Bhagat Yadgar Committee had made numerous efforts during the last two decades to preserve the original character of the Jallianwala Bagh. A total of 225 people had court arrested under the leadership of Bhagat Singh Bilga, said Rattan Singh Randhawa.

He added that the Jallianwala Bagh has been converted into a recreation spot.