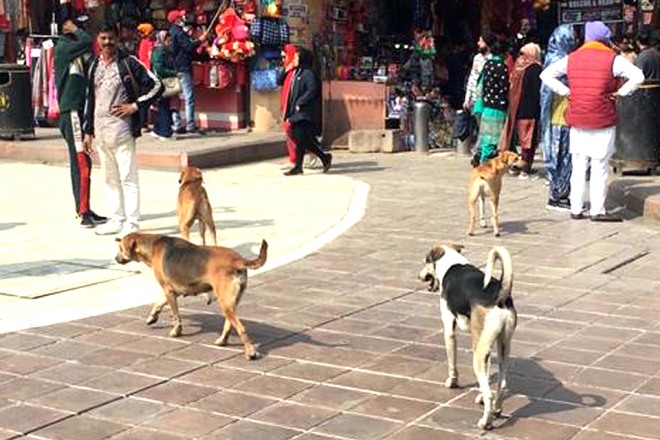 Stray dogs are a common sight at Heritage Street.

The presence of canines has made this stretch quite precarious as they can be seen fighting with each other or barking at commuters. “It is a trouble which I have to face every day. The administration must find a solution to put a leash on them,” said Surinder Pal Singh, a 65-year-old resident who visits Golden Temple early in the morning every day.

The shopkeepers stated that as devotees feed the stray canines, they have no dearth of food at the holy site. “Some or the other person is always feeding bread or biscuits to them. The situation turns bad, when the dogs start barking at any random person. Once they started chasing a worker who was carrying a gas cylinder on his head,” said a shopkeeper Kashmiri Lal.

The exponential growth in the population of canines has resulted in a situation where their numbers in city alone are estimated to be around 40,000. With no proper dog sterilisation programme in place, the menace is further increasing. The administration’s plan to register all pet dogs and use the funds collected from the pet owners to conduct dog sterilisation programme has also failed.

The situation turned bad to such an extent that in January this year, a four-year-old daughter of a migrant worker was mauled by stray dogs near Malawali village behind the old jail.

With the local administration indifferent towards the issue, the incidents of the like of Rani-Ka-Bagh, where seven pups were poisoned to death by an unidentified person, too, are reported frequently. “Proper sterilisation of all stray dogs is the solution to the problem so that their population is controlled,” suggested a dog lover Sukhmeet Kaur.