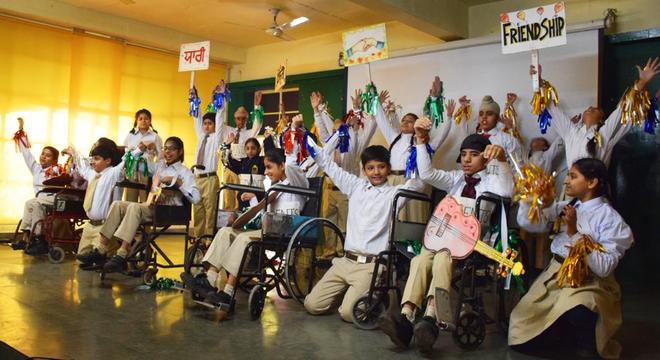 Breaking the barriers of limitations, children with special needs (CWSN), proved their mettle in the Central Board of Secondary Education Class X exams.

Four students of Spring Dale Senior School, the only schools in the city, which has an inclusive education programme for the CWSN, obtained above 80 per cent.

Saksham (name changed), got 84 per cent, despite having multiple physical and learning disabilities.

Saksham (22) suffers from cerebral palsy and related complications. “There was a time when we had almost given up hope that our son would be able to study. We are grateful to his educators, who gave us the confidence and empowered him through specific learning programme. We are extremely proud of him,” said his mother and added that the lockdown and online classes almost broke the routine of Saksham. She said she had to take special classes to understand the methods and learning tools used for special education. “I used to learn from his tutor and then work with him. As it was difficult to study in one go, we divided the work,” she said.

While it was easy for Saksham to lose focus, his mother said whenever he used to feel stressed or missed his friends, he used to listen to music. “He is fond of Punjabi songs and they are his stressbuster.” He has been asking her to allow him to get a tattoo to celebrate his achievement.

Prerna, who is a special educator at the resource centre of Spring Dale School, said the CWSN were taught using specific learning programmes as regualr classes were suspended. “It became a challenge to continue with their education. We devised individual learning programmes for them,” she said.

In Saksham’s case, he was put under peer mentoring, entire curriculum was provided in audio-visual format and his worksheets were converted into visuals.

“His worksheets included coloured pictures/ graphic organisers and separate audio recording of each concept was done at the school recording studio. Videos were made by subject teachers in simplified language for explanation of concepts and provided personally to him. As he couldn’t access labs on the top floor, tools and materials were bought to the resource centre for him,” said Prerna.

An individualised education programme was designed for his holistic development which included life skills. “He was given a choice to send self-recorded audio’s/ videos as alternate to submission of assignments,” said Prerna.