Clean air in Amritsar? Well, not so soon!

Rs19 cr received, but work yet to begin | MC says industries not under its purview 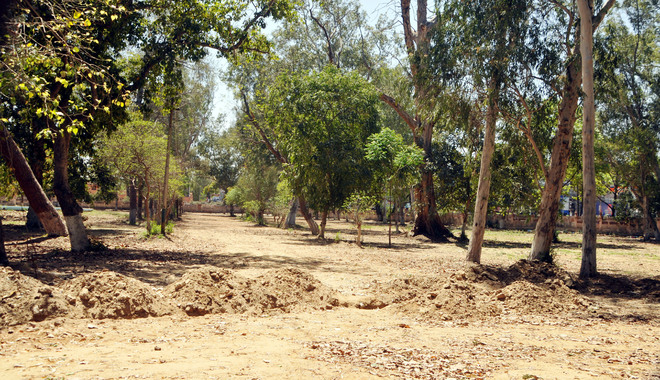 The land where park would be developed in Ram Bagh in Amritsar. Photo: Vishal Kumar

Despite various Central regulatory bodies including National Green Tribunal and Ministry of Housing and Urban Affairs issuing directions and funds to improve the city’s air quality, not much is visible on the ground.

The city was listed in the non-attainment cities under the National Clean Air Programme (NCAP), which means the holy city does not meet the National Ambient Air Quality Standards (NAAQS).

Under the NCAP, three cities including Amritsar Jalandhar and Ludhiana were identified in Punjab based on the air quality data from 2014 to 2018. Municipal Corporation Amritsar received Rs19 crore to improve the air quality in the city under NCAP.

Though the objective of the programme is to reduce the industrial emissions on a priority, industries are not in the purview of the MC. City-specific action plans have been prepared, which includes maintaining of pothole-free roads, procurement of water sprinkling, mechanical sweeping machines, creation of green buffers along roadside, making parks and open areas green, installation of water fountains at major chowks, paved roads, infrastructure for parking, CNG-based crematorium, installation of air purifiers and installation of gobar gas plant at gaushalas.

Initially, MC passed 16 proposals to spend the grant in December, but after getting project details, the proposals were revised as per the mandate of the National Green Tribunal (NGT).

As per the government programme, the MC has to take measures for strengthening the monitoring network, reducing vehicular/industrial emissions and increasing public awareness to improve the air quality.

Komal Mittal, Commissioner, Municipal Corporation, said: “We received a grant of Rs19 crore and made a city-specific plan to improve the air quality. The industry is not in MC’s purview. The meetings are being conducted in this regard and projects under NCAP would be implemented soon.”

In September 2020, the Central Government had launched NCAP as a long-term, time-bound, national-level strategy to tackle the air pollution problem in a comprehensive manner with targets to achieve 20 per cent to 30 per cent reduction in particulate matter concentrations by 2024 keeping 2017 as the base year for the comparison of concentration.